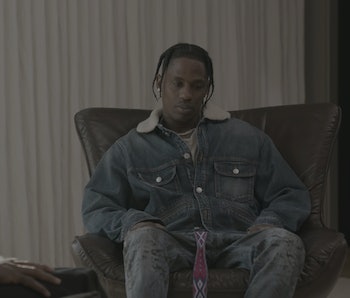 Travis Scott has finally spoken about the Astroworld tragedy, which left 10 people dead and hundreds injured, in his first interview since the music festival. The 50-minute-conversation, posted on YouTube on December 9, was hosted by radio personality Charlamagne Tha God.

“I just didn’t hear that” — Since Astroworld, Scott has been named in more than 275 lawsuits. Most allege the defendants, including the rapper and event organizers, were negligent and stood to make huge sums of money from the concert. Still, Scott has requested to be dismissed from several of the lawsuits, denying all allegations, including those of negligence, against him. A representative for the rapper also told Rolling Stone that Scott “is not legally liable” for the tragedy.

In his interview with Charlamagne, Scott claimed he didn’t know that Astroworld was declared a mass casualty event until a press conference after the show. “And even at that moment you’re like, ‘Wait, what?’” he said. The rapper added that he didn’t hear fans screaming between songs for him to stop the concert.

“It’s so crazy because I’m that artist, too — anytime you can hear something like that, you want to stop the show. You want to make sure fans get the proper attention they need,” he stated. “Anytime I could see anything like that, I did. I stopped it a couple times to just make sure everybody was okay. And I really just go off the fans’ energy as a collective — call and response. I just didn’t hear that.” Scott said he was only told that the show must end after Drake appeared on stage, and that he wasn’t provided a reason for why the performance was being cut short.

The dangers of raging — Charlamagne asked Scott on whether his promotion of aggressive crowd behavior, or “raging,” increased the likelihood of Astroworld’s tragic outcome. The rapper has a history of encouraging out-of-control crowds, multiple lawsuits say, with one even describing the event as “preventable and predictable.”

“That’s something I’ve been working on for a while, is creating these experiences and trying to show these experiences are happening in a safe environment,” Scott responded. “Us as artists, we trust professionals for when things happen that people can leave safely. And this night was just like a regular show, it felt like to me, as far as the energy. It didn’t feel like, you know… people didn’t show up there just to be harmful. People just showed up to have a good time and then something unfortunate happened and I think we really just got to figure out what that was.”

“’Raging’… there’s not a textbook definition,” he continued. “But in concerts we’ve grown it to be just the experience of fun. It’s not about just… harm. It’s not about that. It’s about letting go and having fun, help others and love each other.”

Much of the blame for Astroworld’s events has fallen on Scott, the face of the festival, but attorneys have also targeted event organizers like promoter Live Nation, which bear a responsibility to keep all concertgoers safe, they say. Ultimately, Scott has pushed back on the notion that he should be held accountable for the tragedy: “The media wants to put on me, but at the end of the day… it’s more so about stepping out to figure out what the problem is,” he said in the interview.

Moving forward — Since Astroworld, Scott’s image — and revenue — has been severely impacted. Multiple brands have canceled or hit pause on their collaborations with the rapper, and fans have posted videos of themselves destroying Scott’s merchandise. Yet he does intend to return to the stage, Scott said in the interview, mapping out what precautions he would take to avoid another tragedy.

“First things first, before anything, we address the safety concerns. Not even for just me, but you don’t want other artists to experience that trauma,” he said. “Once we take major steps into moving in that direction, I think it would be cool for people to practice that healing… Music is part of healing.”