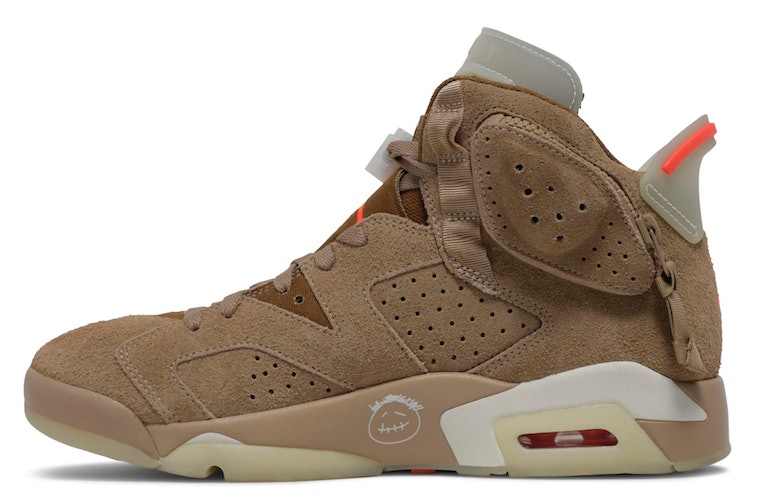 Travis Scott has reminded us once again that his three-year-old daughter Stormi has a better — and much more expansive — sneaker collection than us peasants. But in doing so, the rapper has seemingly confirmed the upcoming release of his Air Jordan 6 collaboration. Scott took to Instagram to show off his birthday gift to Stormi: a miniature pair of the Travis Scott x Air Jordan 6 “British Khaki” and an equally tiny matching hoodie. Now the question is, when will we get to wear ours?

We can’t say for sure, and unfortunately, that applies to other Travis Scott sneaker collaborations — of which we’re certain Stormi already has multiples of. The rapper kicked the year off by teasing a previously unseen Air Jordan 1 Low, which featured the signature backward Swoosh that graced his Jordan 1 “Mocha” and PlayStation Dunk. A high-top version surfaced later, and it was revealed a third collaborator — Fragment Design — had been working alongside Nike and Scott to create the sneakers all along. We’ve only seen paparazzi shots and mock-ups since then, though, but Scott’s teasing Instagram posts imply the shoes will be dropping momentarily.

It looks as if the sneakers come with deluxe packaging, as seen in Scott’s Instagram post. A specially branded shoebox, along with a Jumpman-branded dust bag, is included in the packaging — assuming it wasn’t an add-on for Stormi's exclusive seeding.

While it’s hard for us to admit, it looks like a three-year-old has more details on these sneakers than we do. Scott hasn’t announced a drop date, nor what the Air Jordan 6 will cost consumers. Rumors speculate the shoes will retail for $250, which seems overpriced until you consider the resale value of the coveted collaboration.

The anticipation builds — Despite the silence from the rapper, we’re expecting the sneakers to drop soon — perhaps as the weather gets better and our shoes are safe from climate damage. Unfortunately, the highly anticipated pair might drop in the very place sneakerheads’ dreams go to die — the SNKRS platform — and even worse, Nike might subject the AJ6 to a draw to keep up with demand. Truly, we’ve never been so jealous of a three-year-old and their sneakers.