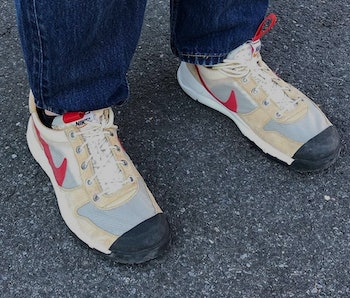 In 2019, Tom Sachs and Nike launched their "Mars Yard 2.0" collaboration, which quickly established itself as one of the most covetable sneakers of the decade. The original version, released in 2012, was the artist's first Nike sneaker and came as part of his second NASA-inspired exhibition, Space Program 2.0: Mars. That sneaker fell relatively under the radar at the time, but the same couldn't be said for Sachs' second shoe.

Minimal changes to the silhouette were intended to make the 2.0 sneaker more wearable for everyday life, and the first chance people had at purchasing them required taking part in an hour-long "Space Camp" in New York City. By then Sachs had much greater crossover appeal, and the wider release was only slightly less burdensome than an obstacle course. Quite quickly, the only way you could get a pair was by shelling out $2,000 on the resale market — and today the going rate has climbed over $4,000.

Demand was so high that some saw the Overshoe version, released two years later, as a chance to simply cut off the namesake decoration to reveal the prize inside. Rumors of a restock for the Mars Yard 2.0 have persisted ever since, but it's starting to appear like another sneaker update is on the way.

A 2.5 version has surfaced — While mum is the word from Sachs and Nike, images of a Mars Yard 2.5 have been posted by an unexpected and more legitimate source than your typical sneaker leaker. East Village's Half Gallery shared the first images of the new sneaker through its Instagram account, making for a stark contrast with the artwork that typically appears in its feed.

It's hard to draw too many conclusions from the one (1) single photo taken by someone who doesn't know the angles a sneaker demands, but clear reinforcements make the 2.5 version look like a sneaker-boot hybrid. A rubber-reinforced toe opens up the possibility (and safety) for kicking rocks, while the laces look to be roped as you'd see on your standard hiking boot.

The majority of the silhouette has the same through lines as its predecessors, but the darker brown paneling has been replaced by a lighter tan. It also appears as if the mesh takes on a blue hue, although it very well may just be because of the lighting. Whatever the final result ends up being, the photo is enough to whet our appetite and prepare us to shell out some dough.

When (or is) it coming? —  Who knows? Rumors of a Mars Yard 2.5 began circulating in May, and six months later this one Instagram post is the only new development. It's possible that the 2.5 version is just a prototype as well, with a proper 3.0 destined for an eventual release. For now, we'll just have to speculate and cross our fingers. Given that it's nearly December and Nike's slate is fairly full, sometime in 2021 is likely the earliest we'll see a new Tom Sachs sneaker hitting stores.