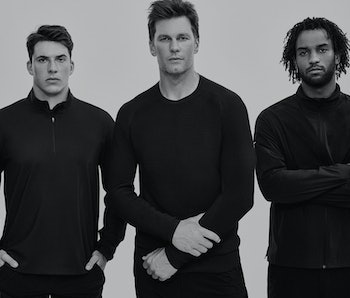 Tom Brady is ensuring he’ll have an income even after he retires — whenever that is — with the launch of his own apparel brand, Brady. Set to launch in early 2022, the label has been in development for over three years (or just over one-tenth of Brady’s NFL career), and was crafted alongside former DKNY designer Dao-Yi Chow and Jens Grede, who helped Kim Kardashian build her Skims empire.

According to the Wall Street Journal, Brady wants to achieve the same level of notoriety as Michael Jordan’s namesake brand — which sportswear company doesn’t? Reaching that goal will take more than a big name, however, and it’s worth noting that no matter how innovative Brady’s products are, he doesn’t hold the marketing power as Jordan. The Jumpman logo travels easily off the court, while Brady’s logo probably won’t be visible on the football field. Besides, when was the last time you hit up StockX for a pair of Brady x Under Armour sneakers?

An impressive marketing roster — Subsequently, Brady has called for reinforcements, recently signing a diverse group of 10 NCAA and newly drafted athletes. With more faces attached to the brand, Brady hopes to act as a platform to amplify their collective voices, inspiring the next generation of athletes. A press release states that the 10 chosen athletes align with Brady’s founding principles, including fearlessness, resilience, and confidence towards achieving peak performance.

“Having these 10 athletes represent our first Brady campaign is really special,” Brady himself said in a statement. “They are hardworking and driven players in the early stages of their careers, and each one of them embodies the spirit and ethos in which our brand was founded.”

To compete with brands like Nike and Adidas — who already have their own roster of notable names, including Jordan, Lebron James, and Kanye West — Brady’s representatives include athletes from several sports, including basketball, football, tennis, and hockey. Cade McNamara, a quarterback who hails from Brady’s alma mater, the University of Michigan, has been featured in Brady’s campaign alongside Freshman of the Year Shedeur Sanders, son of legendary football player Deion Sanders.

Coming soon — As of now, images of Brady’s offerings are scarce beyond the hoodies, jackets, and joggers teased on the brand’s website. Fans shouldn’t have to wait long for their release, though: Brady is scheduled to launch on January 12, 2022 in select Nordstrom stores and at Brady’s website. Whether it lives up to the same hype as Jordan Brand is yet to be seen.