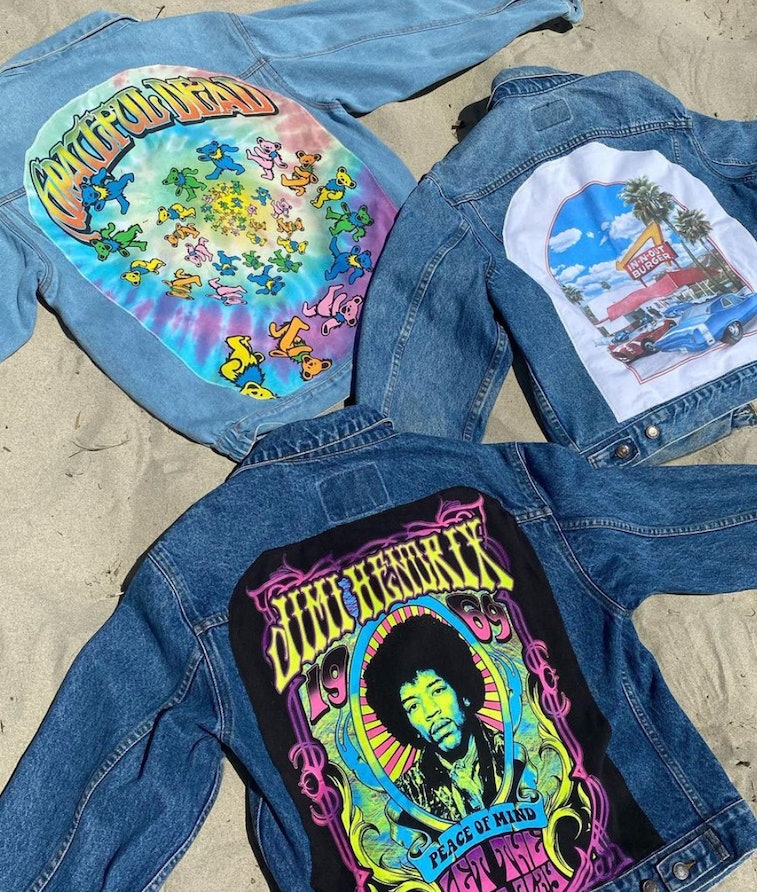 I still remember when my mother and I would go shopping every Saturday, looking for the best deal we could get.

The routine began when I was about ten years old. We would scour tag sales, thrift stores, and occasionally, a Dunkin’ Donuts — sometimes we left the house at six or seven in the morning to ensure we were the first to get into the stores. Thrifting was what first got me into fashion, and now, in a pandemic that has led me to move back in with my parents, it’s a familiar comfort.

On a recent Goodwill trip, my mom turned to me and told me she had noticed an increase in teenagers at second-hand stores. It seemed odd to her, considering our thrifting neighbors were usually her age or much older. Of course, anyone with the TikTok app would recognize second-hand shopping’s recent explosion on the platform, which has the tendency to spread trends and products faster than any other social media app right now.

Shopping second-hand goods is far from new — it’s just never been as popular to watch or do than it is today. In addition to TikTok, apps like Pinterest, Instagram, and YouTube have helped thrifting grow, and with reselling apps like Depop and Poshmark on the rise, thrifting can even be done without visiting a physical store. Combined, online resale and traditional thrifting are set to boom over the next five years by over 400 percent, according to a report from the resale app thredUP. After a year full of activism and education, many consumers are looking to shop more sustainably, while also supporting smaller brands and individuals through their shopping.

There are many positive environmental and ethical aspects of popularizing second-hand shopping, but the rise of thrifting comes with critique. Often, popular TikToks about thrifting are littered with comments claiming those that don’t thrift out of necessity are “gentrifying” the practice. Other TikTok users claim that by shopping second-hand, new thrifters are taking resources away from those that depend on thrift stores’ cheaper prices. Rumors are even starting in the comments of these thrifting videos, saying chains like Goodwill and Savers will raise their prices due to the inflation of second-hand shoppers.

My mom and I started thrifting because we cared about being sustainable and saving money. While my income now allows me to shop wherever, back in May, I transitioned to a closet made entirely of thrifted clothes. The environmental toll of fashion, plus the industry’s underwhelming attempt to promote and sustain diversity, sent me running from traditional shopping. Later in the summer, I noticed a girl named Macy popping up on my TikTok “For You” page. She also thrifted all her clothes, though admittedly had a more positive outlook than I did, so I followed her account right away. Now, that same optimistic energy has led Macy to over 200,000 followers on the platform.

“If you can thrift at places that give back, that's the best thing to do.”

Macy Eleni is what people call "TikTok famous." Although she only began posting on the app in July, her videos have already influenced thousands of people to start thrifting, attend estate sales, and shop more mindfully in general. Eleni, otherwise known as @blazedandglazed, told Input in an interview that she’s “finally found her people.”

Eleni started thrifting around when she was in middle school. Growing up with a single mom and four younger siblings, she remembers stocking up on clothing during Salvation Army’s half-off family day. But what began as a necessity turned into a passion as Eleni saw fashion inspiration in everyday people and Teen Vogue. To her, the thrift store presented a sense of comfort and creativity, in that she could find anything there. Around 2011, she took to YouTube to share her thrifting experience and passion, but wasn’t met with much excitement until her TikTok account blew up this year, seemingly overnight. On YouTube, she said people “didn’t match her energy,” while TikTok embraced her “chaoticness.”

“TikTok is a platform that promotes discoverability,” Eleni said. “It’s really cool that thrifting is growing and people’s minds are opening up to what’s out there.” But with thrifting’s growth, Eleni has established what she calls “thrift etiquette,” which she promotes on her TikTok.

“People always comment, ‘your closet must be massive, how do you keep all these clothes?’” she said. For every trip to the thrift store Eleni takes, she makes sure to bring a bag of donations to drop off. On top of that, she takes care to shop in her size and price range, and mostly shops at nonprofits and local second-hand shops — less so at big corporations like Goodwill. “I don't love thrift stores that aren't transparent about where all of their money goes,” she said. “If you can thrift at places that give back, that's the best thing to do.”

“We need to have an economy where things are more circular and things get reused.”

Eleni’s main goal on TikTok is to get people thinking about what they’re consuming. She recommends going into the thrift store with an idea of what you’re looking for, as well as an open mind: “See an item as what it can be, instead of what it is. My favorite thrift tip and line I live my life by is, you got to give the good shit to get the good shit,” Eleni said. What she means, essentially, is that you’ve got to feel good to look good — you won’t find anything of value with bad vibes.

As people style their second-hand finds, a subtrend of thrifting has also risen on TikTok. Thrift-flipping, or reworking a thrifted piece into something new, usually requires more DIY skill than just perusing the aisles of a second-hand store. Luckily, Montana Sullivan has a trained eye — and over 100,000 TikTok followers.

After graduating college, Sullivan needed to downsize her closet and make some extra cash. Her entry-level job wasn’t doing it for her, and her commute there cut into her already-struggling paycheck. She listed a few clothes for sale on Instagram, selling pieces almost immediately. Between her new profit and the desire to be more ethical, Sullivan decided to redirect her life. “A couple months into that job,” she said in an interview, “I said, ‘I'm just gonna quit my job and try to sell clothing full-time and do modeling.’”

To gain the flexibility she needed for her modeling career, Sullivan started Besos Vintage, her own business focused on selling used, vintage, and reworked goods. Her mother, who likes to quilt and sew, inspired Sullivan to rework thrifted pieces in her own way. “I wanted to use the stuff that was around me,” she explained. “I wanted to create things that didn’t exist or salvage something flawed to make it new again.” Everything listed on Besos, Sullivan said, is either handpicked from local thrift stores or found wholesale through connections. In a way, she’s providing her customers with a customized styling service. “I want to sell easy, no-brainer pieces that customers can wear with stuff they already own,” she said.

Once the global pandemic hit in 2020, however, modeling gigs were shut down, and so were thrift stores. Sullivan found herself with a huge amount of time on her hands and nothing to do. She started sharing daily outfit videos on TikTok, @themontanaexperience, as an attempt to grow her store. “I never really expected to gain a following like this,” she said. “I just genuinely wanted to grow my platform so that I could share vintage clothing with people.” Since then, Sullivan’s been inspiring others to shop second-hand and question where their clothes are really coming from. Of course, TikTok fame always comes with critics.

“More people thrifting is definitely a good thing,” she said. “A lot of people say that it’s taking away from others, but only a very small percentage of clothing that gets donated in the U.S. actually gets put out onto the sales floor.” The rest, she claims, is shipped off to other countries or thrown away — out of sight, out of mind. “If there was more demand for thrifting, we would be keeping more of those clothes. We need to have an economy where things are more circular and things get reused,” she said.

Sullivan is telling the truth. Overflow of product is a common occurrence at donation locations, forcing many store owners to throw away perfectly good clothing. In 2012, 84 percent of all apparel that was donated to thrift stores and donation centers ended up incinerated or in a dump, according to the Environmental Protection Agency. In California alone, Goodwill spends $7 million on dumping unwanted items. More thrifters would mean more clothes being salvaged, in order to keep up with demand. If something’s a little ugly, you can always thrift-flip it.

The future of fashion

Giving up fast fashion is a privilege: thrifting takes time, and isn’t as convenient as a cheap trendy piece delivered to your doorstep. So much of what people are buying comes from influencer marketing, with even the Kardashians backing harmful companies like Pretty Little Thing and Boohoo. Brands like these overproduce clothing and end up throwing most of it away. TikTok, however, is paving the way for a new kind of influencer promoting thrifting and ethical shopping. Imagine the lines for Goodwill if Kylie Jenner was spotted shopping second-hand.

Thrifting could be the future of fashion — it’s something the industry desperately needs. Cheap clothing’s overproduction is strangling our planet, and its ceaseless cycle of replacement and replenishment isn’t sustainable. Although thrifting has been around for decades, this social media spike could change things for the better.

Despite what the TikTok trolls say, there’s more than enough to go around at the thrift shop. We just need to reshape how we’re consuming, and consider the environmental cost of “regular” shopping. Whether or not TikTok is here to stay, individuality and ethics are something that can’t be outgrown. “Fashion is so serious, so exclusive,” said Eleni. “Thrifting is more about the people wearing the clothes, and who they are. That’s the future.”