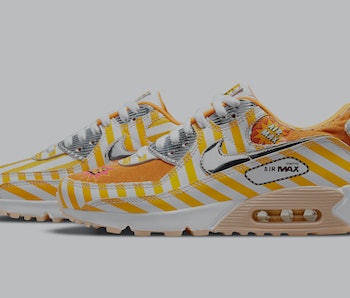 Nike has cooked up a sneaker ode to fried chicken, but save your debate of KFC vs. Popeyes because the inspiration comes from overseas.

The Air Max 90 "Swoosh Mart" looks to Japanese fried chicken for its design cues, specifically that found in convenience stores. Yellow and white stripes feature throughout the upper, including on tearaway panels, similar to the packaging for famichiki from the FamilyMart chain. When the paper is torn away at the toe and heel, fried chicken-esque gold suede is revealed along with poppy Air Max branding.

Metallic silver is used for the Swoosh, eyelets, and mustache — and perhaps the funniest detail of all is a pair of tongues printed on the insoles. Because of the specificity of the source material, the Air Max 90 "Swoosh Mart" may not see a stateside release. But even if you can't imagine eating convenience store fried chicken, you can appreciate the attention to detail paid by Nike.

Today, KFC is synonymous with Christmas in Japan, with more than 3.6 million families turning to the chain each year, as of 2016. Karaage is also a common offering at Japanese convenience stores, and Momofuku founder David Chang is a huge fan. He highlighted the unique culture of fried chicken in Japan in a dedicated episode from the first season of Ugly Delicious.

Lawsons, another Japanese convenience store chain, was the favorite karaage destination for Anthony Bourdain — a must-visit every time he was in Tokyo.

Asia's gonna eat — For now, the Air Max 90 "Swoosh Mart" has only been announced for a March 19 release in Asia. The kicks will be available through Nike's country-specific webstores, as well as select retailers, for ~$140.

By utilizing a proxy service, getting a pair to the U.S. may still be easier than getting authentic karaage. But with how popular fried chicken is in Japan, you'll have stiff competition abroad.