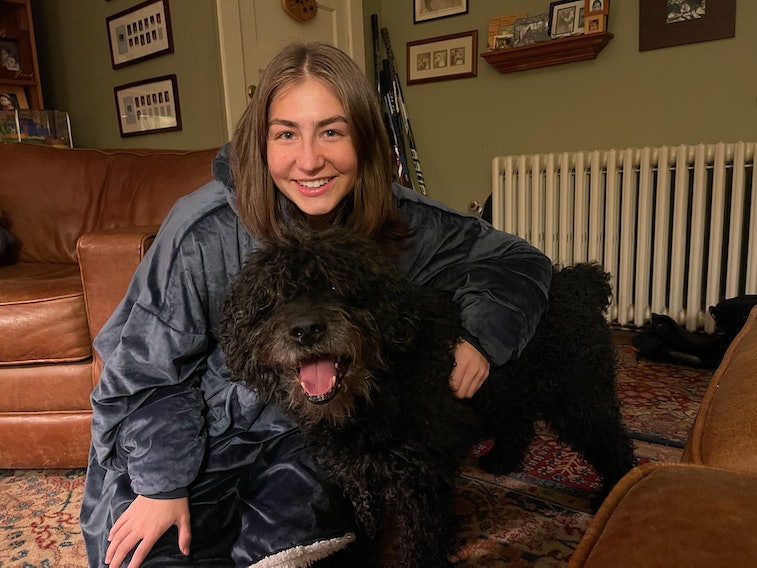 Have you ever had to sacrifice one beloved thing for another? That’s what living with my dog Oso is like, but he’s always the winning party.

Like many people in their 20s during the pandemic, I moved out of my city apartment and back to my hometown — far from my friends, public transportation, and Postmates delivery range. The change was jarring, having lived in my own space the last four years, and moving to a small town with nothing to do wasn’t my ideal situation. But every cloud has a silver lining, and that was the fact I got to hang out with my dog again.

Standing just over a foot tall, Oso is smarter — and pettier — than many assume. Once, when my family left for vacation, he flipped up one of our home’s oriental rugs, pooped underneath it, and covered it with the rug itself. His filthy, despicable act was only discovered after the dogsitter, my cousin, literally stepped in it and spread the dog’s excrement into the rug’s fringe. Honestly, my dog is kind of a dick.

With the past in mind, it shouldn’t come as a surprise he’s destroyed other valuables around the house. Sweaters, shoes, and jackets have all fallen victim to his vengeful executions. And most recently, Oso went all out after my "Comfy," a wearable blanket and pacifier that was entirely claimed by him with no hope for salvation.

I indulged in getting the best-selling sweatshirt and blanket hybrid.

Being home all the time requires comfortable loungewear. So, like many others who are stuck working from home, I indulged in getting the best-selling sweatshirt and blanket hybrid, The Comfy. A $39 beacon during my quarantine, the Comfy was everything I could have wanted: warm, snuggly, and obviously, comfy. Throughout many depressions — regular, seasonal, pandemic, you name it — the Comfy was there for me.

Unfortunately, my dog seemed to take solace in the Comfy’s amenities as well. Everytime I wore it near Oso, he couldn’t help but be enamored by the pullover’s ultrasoft microfiber exterior. In fact, he loved it so much, he would follow me around attempting to hump, bite, or otherwise flirt with the Comfy. It became increasingly clear Oso was just as into the wearable blanket as I was, perhaps even more so.

Everyone knows how dogs can be once they’ve set their sights on a target — but this Comfy unleashed something else in my pet. I had never seen his gaze so lovestruck, nor had I been followed around before at such an alarming rate. Over time, Oso’s attempts to seduce the Comfy became more aggressive, and his teeth and claws didn’t mix well with the Comfy’s plush exterior.

It was time for the ultimate sacrifice: giving my dog my Comfy.

I was also becoming increasingly uncomfortable with wearing what was the equivalent of my dog’s — well, tissue, to put it lightly. The Comfy was solely for my enjoyment, and I didn’t want to worry about smells, fluids, or other unpleasantries when wearing it. Once Oso’s claws desperately ripped through the back of the garment, I knew it was time for the ultimate sacrifice: giving my dog my Comfy.

If you couldn’t tell by his naughty behavior, Oso is very spoiled, mainly by my mother. While I’ll throw him a bone sometimes, it’s rare for me to gift him something of my own. But the Comfy saga had gone too far — it belongs to him now, leaving me completely comfort-less with no pullover and trauma from being constantly humped by my beloved dog.

Despite other members of my family owning Comfys, none have had to sacrifice their comfort for the dog’s. I’ve noticed one key difference, however, and that’s that they own the “Teddy Bear Quarter-Zip” version instead of the original (like me). The upgraded $50 iteration of the Comfy doesn’t have the same outer material, instead opting for an all-over sherpa look. And, lucky for them, Oso doesn’t seem to care for that texture. He knows what the real deal is, and won’t settle for any less.

Of course, now that he’s stolen my Comfy, it’s unlikely he’ll bother anyone. Oso has something to satiate himself with, while I lose sleep at night wondering what my former Comfy has to endure. So much for man’s best friend — I need a new blanket to wear. Let’s hope Oso isn’t into polygamy.