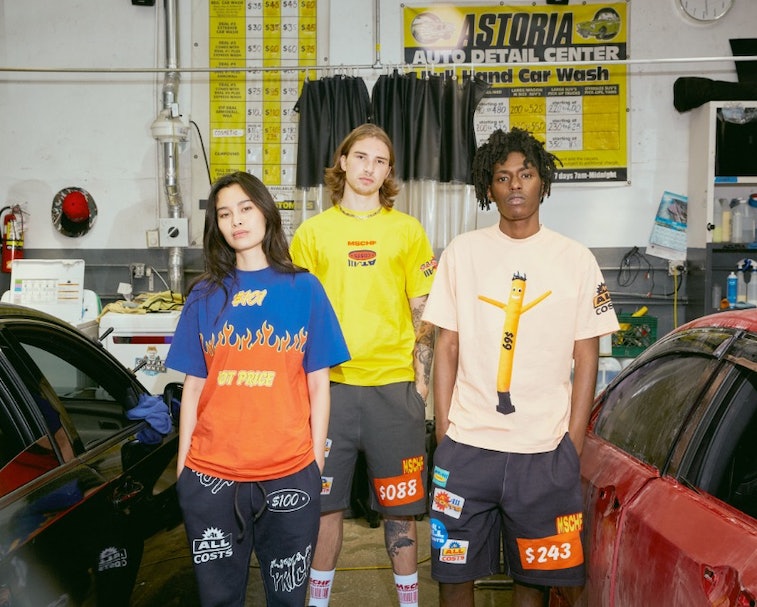 From a retail perspective, MSCHF and Lil Nas X’s “Satan Shoes” ended in doom. After a whole bunch of Christians and conservatives cried foul, Nike was able to get MSCHF to voluntarily recall the 666 pairs of custom Air Max 97s (which each included a drop of human blood) as part of an out-of-court settlement. But when viewed as an art project, which is always how it was intended, all the fuss signified a remarkable success for the Brooklyn-based art collective.

Now, months after the controversy, MSCHF is back with another product drop that doubles as performance art. The new “At All Costs” collection makes a strong argument for the luxury market not being about items’ intrinsic merits, but about their cost instead. So instead of merely implying how much you spent, why not actually wear the exact price tag?

A hoodie, crewneck sweater, sweatshorts, and three T-shirts are all being sold with the price you pay printed right on the articles of clothing. Besides the individualized figure, there are no discernible differences between, say, one hoodie and the next. And that’s exactly the point.

MSCHF’s manifesto — On a dedicated manifesto page for the collection, MSCHF starts out by arranging four white T-shirts alongside each other, including the Kanye West and APC tee that went viral eight years ago for its $120 price tag. Not exactly an original place to start, especially when the initial Kanye argument completely glossed over the quality of Egyptian cotton, but the collective does go on to make a more salient point about many streetwear brands using the same Gildan blanks.

“Does an image of two rabbits fucking really add 9x (20x resale) the value?” MSCHF asks about an Anti Social Social Club graphic printed on a Gildan hoodie. “You get what you pay for. So wear your heart on your sleeve and your wallet on the other.”

How the drop works — Each of MSCHF’s pieces from the At All Costs collection (available here) comes with its own price range, each starting at $0 and with top ends of $300 to $500. It isn’t as simple as just paying what you wish, though. Slots are available in dollar increments for each given piece, and once a price slot sells out you no longer have the option of paying that price. The sweatshorts, for example, can now be had for no less than $108 — and someone has already paid $121, $123, and $169 (nice) just to get those figures printed on.

None of the pieces have completely sold out yet, but the longer you wait the more you’ll have to pay. As of writing this, the cheapest item to be had is a flame-riddled T-shirt that’s still available in the seventies. Act quick to be a part of the performance art piece — or better yet opt out entirely if you don’t need your statement to become tangible.