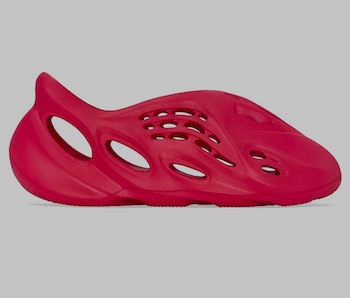 Just when it seems that hype for the Adidas Yeezy Foam Runner couldn’t get any hotter, the sandal has now been confirmed with the most iconic color scheme from Kanye West — or erm, ‘Ye.

The “Red October” treatment is coming to Yeezy’s red-hot foam clog, although the singularly bright color is officially being called “Vermillion.” It marks the first time all-red has been used for any Yeezy shoe — which the streets have been clamoring for ever since West came to Adidas.

Released online without any warning in February 2014, the Nike Air Yeezy “Red October” was the last and perhaps most hyped sneaker from West’s time at the Swoosh. The third variant for the Air Yeezy 2 was first leaked by a sneaker collector before Kim Kardashian shared an image featuring the sneaker alongside a mockup for the yet-to-be-released Yeezus album. West himself would then wear the kicks during his May 2013 Saturday Night Live performance, leaving sneakerheads to wait for nearly a year before it would finally release.

A shoe that very easily could have been shelved — In the period leading up to the release of the “Red October,” Adidas announced that it had signed West to an exclusive deal — leading to doubt that his all-red Nikes would ever see a release. The lyric “Yeezys all on your sofa / These the Red Octobers” from “Hold My Liquor” could have been the only relic for the highly anticipated sneaker, but Nike graciously and unceremoniously released it despite its relationship with West expiring.

Nike, as well as other sneaker brands, has released all-red kicks that have been given the unofficial “Red October” nickname — but the Foam Runner will mark the first time West aligns himself with the color scheme in nearly eight years.

You can expect to be competing with nearly every sneakerhead alive come October 29, when the latest edition of the Foam Runner is slated to release for $80. Should you be lucky enough to secure a pair, you’re in for a lucrative flip or ownership of a landmark Yeezy.