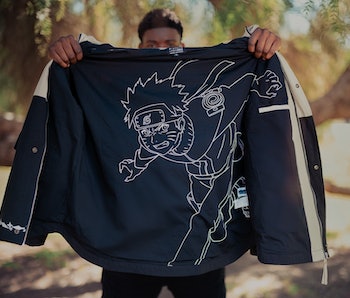 Popular esports organization Team Liquid announced a new line of apparel to add to its growing merch collection. Already known for its ongoing partnership with Marvel Entertainment and its line of character-themed wear, Liquid will now collaborate with Viz Media’s Naruto Shippuden, one of the most well-known anime series of all time. The collective apparel features Team Liquid graphics as well as iconic members of the Hidden Leaf Village, like Naruto, Sasuke, Sakura, and Kakashi.

"Team Liquid's goal is to continue excelling in the world of apparel and innovative co-branded programs. We know gaming constantly crosses paths with other industries and cultures, especially anime. Like our fans, we love anime, and Naruto is one of the most successful anime franchises of all time. We couldn't be more excited to announce this strategic partnership to our fans," Team Liquid chief business development officer Mike Milanov said in an official press release.

Fit for a ninja — The teaser shown on Team Liquid’s Twitter account shows the organization is bringing esports and anime fans together through its capsule of joggers, jackets, hoodies, and T-shirts. And while the bright apparel has certainly got fans’ attention, another star shown in the clip has stolen the show.

To commemorate the launch, Team Liquid invited actor and director Dominique "King Vader" Barrett to model the clothing and create a live-action anime short to coincide with the launch. It’s a fitting partnership, seeing as Vader rose to fame in 2018 with his "Hood Naruto" series.

Vader can be seen donning a denim jacket, a Jonin-inspired parka, cargo joggers, T-shirts, and stylized hoodies. Many of the pieces are tie-dyed blue, orange, white, and gray to align with the anime series’ colors, and feature Naruto and Team Liquid branding.

Cop the collab — With prices ranging from $35 to $100, there’s something for everyone in this drop. But beware — everyone will also be trying to cop. You can try your best at scoring on Team Liquid’s website, where the Naruto x Team Liquid collection will launch exclusively in the U.S., releasing February 12 at 3 p.m. E.T.

Unlike Team Liquid and Marvel’s continued partnership, we’re unsure whether we’ll see more ninja-inspired apparel. The seemingly limited collaboration already has consumers lining up to purchase and the collection’s drop will surely sell out in minutes. But like Naruto says, “Believe it!” Maybe then you’ll score.