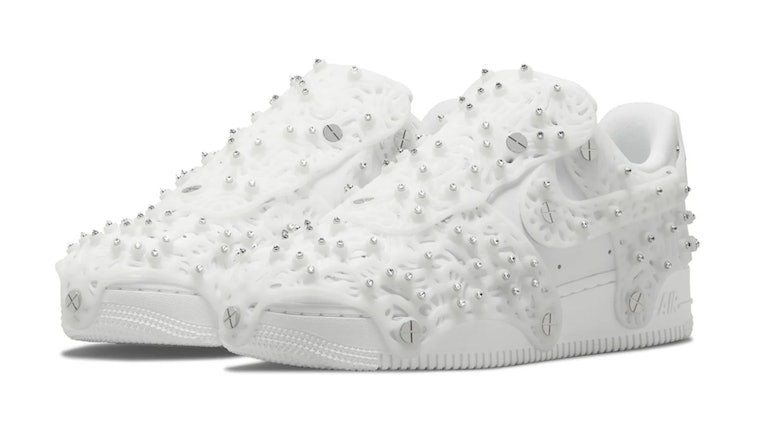 Shifting away from its preferred Air Max 97 model, the brand has reworked Nike’s Air Force 1 to include rubber overlay panels, screws, and naturally, Swarovski crystals. In theory, the sneaker sounds amazing — but in practice, it looks abnormally like tar or some other unwanted goopy mess. Even Swarovski’s bling, sprinkled into the gooey-looking rubber panels, can’t alleviate the skin-crawling feeling that accompanies its monstrous shoes.

Sparkling semen sneakers — Fortunately, the jewelry brand has prepared two iterations of the Air Force 1; white and black. The latter is the most tolerable given it doesn’t look like someone jizzed all over your sneakers, although the texture of its rubber panels is still rather off-putting. Why does it look so stringy? And why does it have to be translucent?

Each crystal-encrusted rubber panel can be removed from the sneaker with an accompanying mini screwdriver — it’s almost as if Nike and Swarovski knew people would want to take the goopy-looking overlays off. Yet you’d have to sacrifice its sparkly elements to get rid of its viscous ones: Unlike Swarovski’s past sneakers, the crystals are applied onto the rubber overlays rather than directly on the shoe.

Stringy rubber panels cover most of Nike’s branding, including the shoe’s Swoosh. It’s worth noting, however, that there’s no Swarovski-specific branding to cement its connection to the pair — proof that whoever created these sneakers should be ashamed of themselves.