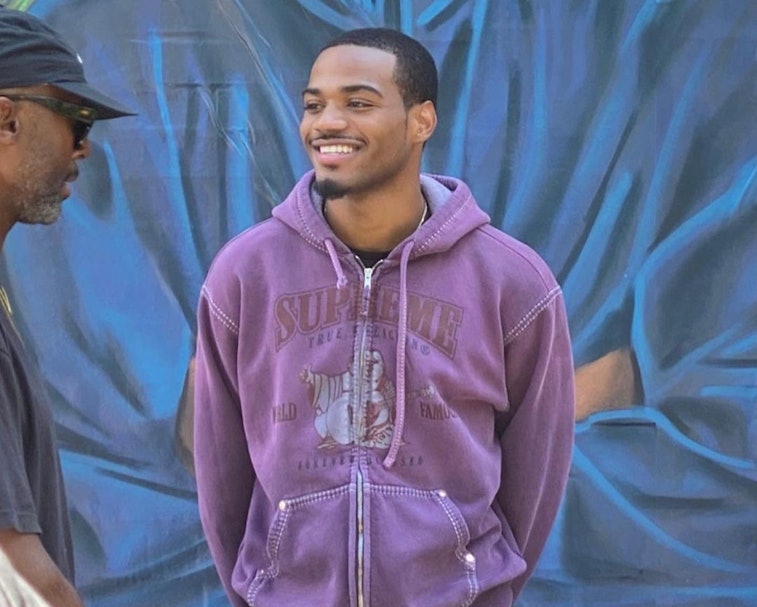 Supreme team skater Tyshawn Jones unveiled a mural of his likeness this weekend in the Bronx, but it’s what he wore for the occasion that’s generating the most noise.

Jones was spotted wearing an unreleased Supreme x True Religion hoodie, suggesting a collaboration between the two brands is imminent. The purple zip-up with contrast stitching is a staple from the once-reigning denim supplier and now sees “Supreme” branding get top billing above True Religion’s signature smiling Buddha graphic.

Had this collab dropped seven or eight years ago, when rappers including Chief Keef and 2 Chainz were still repping hard for True Religion, the release would have been monumental. Today, the linkup is certainly still surprising — but the only question is if anyone actually wants it.

The start of a comeback? — True Religion was founded in 2002 and enjoyed success throughout the decade as designer denim had a hold on fashion. The brand became most closely associated with hip-hop in the early years of the next decade, but even then sales were beginning to drop as athleisure’s rise began. True Religion would file for bankruptcy in 2017 and then again in 2020 — and you get the sense it needs Supreme far more than vice versa.

If True Religion is ever due for resurgence, though, the time may be now. Gen Z is bringing back mid-aughts trends that it was too young to partake in the first time around. Both low-rise and baggy jeans have ushered in the death of skinnies, while the gaudy era’s revival can also be seen in the reemergence of trucker hats, Ed Hardy tees, and velour tracksuits.

Supreme has yet to confirm any details of its True Religion collaboration, but you better bet it will include the latter’s graphic-heavy denim. Even without seeing it, the capsule should be just tacky enough on paper to be embraced by ‘00s fetishists. And if a Supreme collab isn’t what ushers in True Religion’s comeback, perhaps it’ll never happen at all.