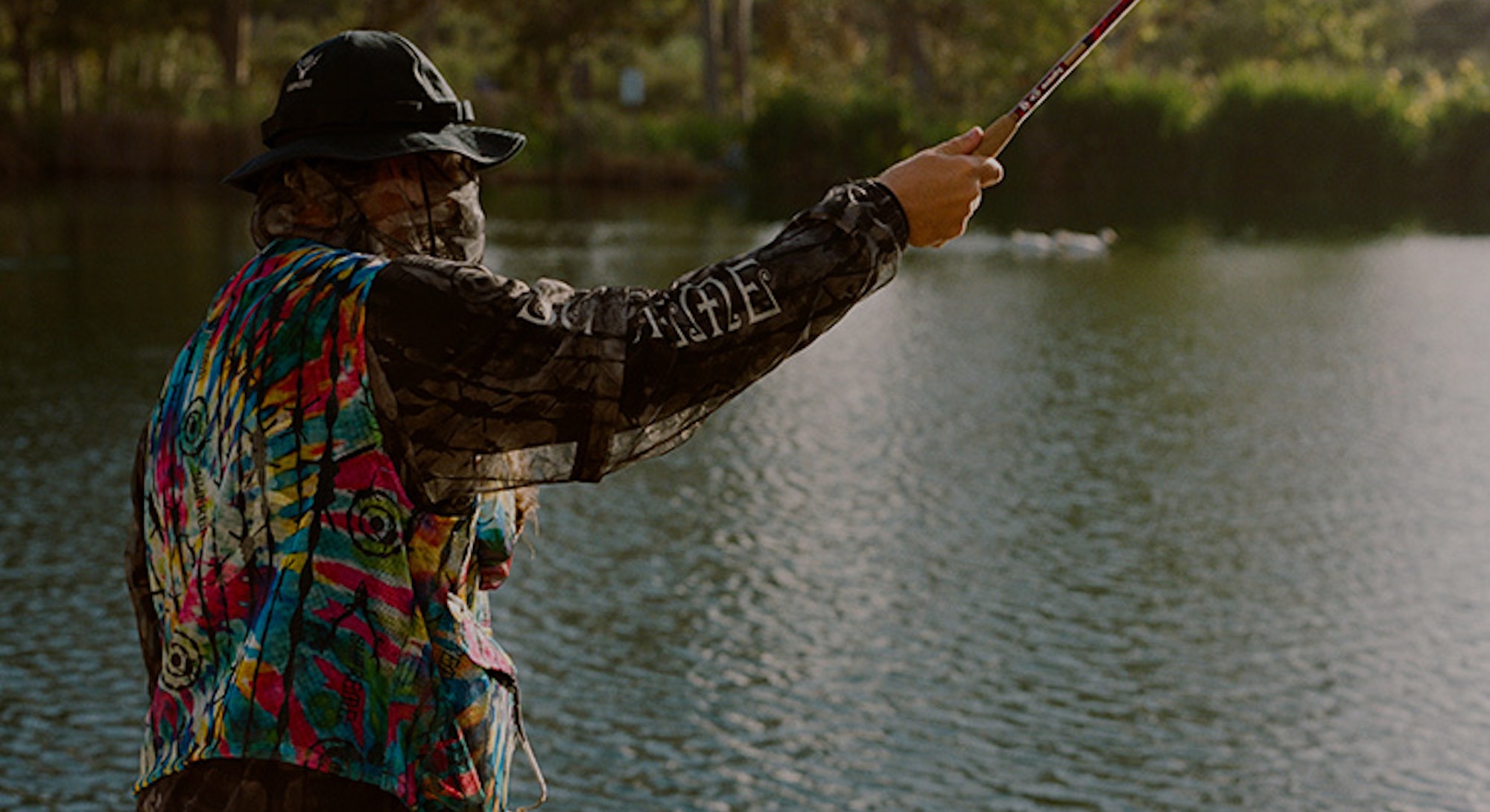 This week, Supreme is putting on its waders and getting into fly fishing.

The New York streetwear brand is releasing a collaboration with South2 West8, a Japanese brand under the Nepenthes umbrella that specializes in fashionable fishing attire. Together, they’ve made a huge crop of flamboyant fishing jackets, pants, and hats in unnatural camouflage and tie-dye.

While fully functional, it’s not the type of gear you’d expect to see at the river — and indeed, because of Supreme’s customer base, many, if not most, people who purchase will have no intentions of fishing in it. This sort of cosplaying isn’t unprecedented in fashion, just look at the popularity of Carhartt outside of blue-collar workers, but it could be particularly befuddling with the collection’s inclusion of a co-branded fishing rod.

“I guarantee not a single fish will be caught with one of these,” a Redditor said on the Fly Fishing Circle Jerk forum. “None of them will even get wet most likely.”

Other very online fishermen have expressed their dismay for Supreme-branded fishing gear in the comments of the Fly Fishing Bureau of Investigations meme Instagram account. The FFBI posted a picture superimposing the collaboration with a screenshot from Childish Gambino’s “This Is America” music video, and users have joked about Chanel and Gucci getting into the sport next. The internet, of course, is liable to exaggerated outrage — so Input decided to interview a couple of fishermen to get a deeper reading on the community’s pulse.

Stefan Ayon is both an avid fisherman and a fashion designer with his own workwear label Stay Made. He’s uniquely situated to understand the disparate elements colliding on Supreme’s South2 West8 collab — and, yes, he does hate it.

“As a designer myself, I try to reference things that are personal and thought out,” Ayon says. “I don’t reference basketball like you see everyone do. Like what does Dior have to do with Basketball releasing Air Jordans? It’s just one of those things where it’s a cultural and marketing grab that seems incredibly disingenuous.”

“It’s just one of those things where it’s a cultural and marketing grab that seems incredibly disingenuous.”

In the earlier days of Supreme starting to garner wider attention, skaters chastised those who didn’t skate for wearing the brand founded on the sport. Tyler, the Creator, who inadvertently helped make Supreme go more mainstream, said “You don’t fucking skate, take off that Box Logo” on the 2009 song “AssMilk.” Ayon says his grievance is similar and asks, “Should a fishing shop start carrying skateboards?”

More amused by the emergence of hypebeast fishing gear is Lance Kittle, a seasoned fly fisherman and childhood friend of this writer who couldn’t be more removed from the worlds of streetwear and fashion. “I’ve seen pictures of people out fly fishing in those inflatable dinosaur suits,” he says. “There’s a value of something that’s laughable, more so than the actual brand itself. To anglers, Supreme is laughable, and they’ve got their logo on so much random shit. So buying bits and pieces of their apparel could add a hilarious edge to their setup.”

Kittle also likes how he’s seen more people get into outdoor activities during the pandemic, and if the Supreme South2 West8 gear is just worn broadly outside he doesn’t care if it’s not actually used for fishing. One thing he and Ayon both agree on, though, is that you’re not likely to see any real fisherman use the Supreme rod.

“The technique and knowledge comes before flexing with gear,” Ayon says. “If you’re rich, you can buy the most expensive things, but if you don’t know how to use the fucking thing, it doesn’t matter. If you don’t have a driver’s license and you buy a Ferrari, what good is it?”

“To anglers, Supreme is laughable.”

Ayon recounts a time he was ice fishing in his home country of Canada using just a paint stick with a line attached to it. Two more decked-out fishermen came by and made fun of his setup, but Ayon had the last laugh as he reached his quota in an hour and a half while the other two didn’t catch a single fish during the same timespan.

Ayon and Kittle would also be stoked if Supreme’s collection did inspire more people to get into fishing, although Ayon stresses it’s important to get into the sport with the proper level of respect. “They should have a mindset of conservation rather than domination,” Ayon says. “Go out there with a genuine interest, apply yourself to the challenge of researching the body of water. Ask questions, go to a local fish shop.”

If you don’t put in the work and just show up to a body of water with Supreme gear, Ayon warns, you’re going to look like someone who does a “mall carry” with their skateboard. It’s obvious when your skateboard is free of scuffs and the wheels are still clean, exposing yourself as a poser.

Many of the people who’ve complained online about Supreme’s collection don’t realize South2 West8 is a respected fishing brand in Japan, selling not only apparel that crosses over into fashion but proper rods and nets. More specifically, the brand focuses on the traditional and minimalist Japanese method known as “Tenkara.” Supreme’s polarizing collaboration could have the benefit of giving the niche brand more exposure in the States to anglers and non-anglers alike.

For all the implications of the new hypebeast fishing gear, its existence is best looked at as a joke. Some may apply the label disparagingly, while others find humor in it. Supreme is already a flashpoint within the streetwear community, and now a new group is finding itself engaging with the controversy of a $2 billion brand built on T-shirts and hoodies. With how far Supreme has come from being first and foremost for skaters, who’s to say what’s even “on-brand” anymore?