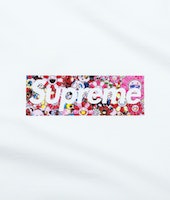 How many seconds it took Supreme to sell out of its latest box logo T-shirt.

Supreme normally keeps it quiet when it comes to... everything. For announcements, about all you're going to get is product-focused: a release date, item details, and cursory background information. It goes on sale, people eat it up, and Supreme never needs to say much more. It wouldn't be their style to even announce how much they've raised for charity — though that information has now become public thanks to Supreme's benefactor.

HELP USA says it has received $1,052,040 in sales generated by Supreme's special COVID-19 box logo fundraiser. The T-shirt featured original artwork from Takashi Murakami, as he combined Supreme's most iconic logo with his signature flower motifs.

Selling for $60 a pop, the shirt's net proceeds were donated to HELP USA for its effort to provide aid to children, families, and the homeless during the pandemic. Assuming a standard markup of 50 percent, that would mean Supreme sold more than 35,000 shirts.

The shirt sold out instantly... of course — Anything with the box logo is guaranteed to sell out in seconds, and this fundraiser was no exception. All sizes were gone in just 7 seconds, according to a third-party tracker.

Many streetwear enthusiasts complained that Supreme should have done a pre-order to maximize proceeds — a valid point if you set aside the obvious self-interest involved. However, as the brand Noah, a sort-of Supreme disciple, told Input, its production capacities are limited because of reduced staffing during the pandemic. Supreme would certainly have the same issue, although it has never done pre-orders before.

Previous fundraisers — Supreme has a history of using its box logo for charitable purposes. Just last year, the T-shirt commemorating its San Francisco store opening raised proceeds for the San Francisco AIDS Foundation's Harm Reduction Center. Prior to that, a rising sun box logo was made for Japan tsunami relief in 2011, and an American flag variant was sold after 9/11.

What's new is us getting any further information after the launch — beside the astronomical markup in the resale market.