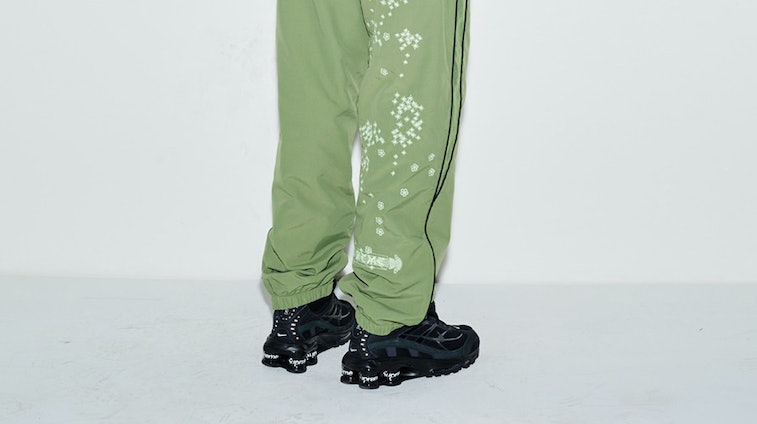 Supreme just revealed its lookbook and preview for the Spring Summer 2022 collection, and if you look closely enough you’ll find a teaser for its latest Nike collaboration.

The Shox Ride 2 is making a comeback under Supreme’s stead, with an all-black color scheme shown in one of the full outfit looks. The silhouette is one of the lesser-heralded amongst the Shox’s reign in the aughts, but Supreme loves to shine a light on some of Nike’s more underrated sneakers.

Supreme has added its Futura font logo to the namesake Shox, which wraps around each of the four cushioning units. Although no other flourishes can be seen from the single photo of the sneaker, you can bet Supreme has more in store when it’s ready to fully reveal the Shox Ride 2.

The aughts are back, baby — Nike brought back its uniquely springy cushioning system in 2017 on the Shox Gravity, but it didn’t exactly take hold like the Shox first did in the 2000s. Perhaps now, when Gen Z has fully fallen in love with all things aughts, will be a better time for Nike’s foam columns to fall back into favor.

Nike debuted the technology in 2000 with the Shox R4, and it’d go on to be used in shoes for running, basketball, and tennis. Since 2017, Skepta and Comme des Garçons have partnered with Nike for their own collaborative pairs — and now we’ll see if Supreme still has the power to help bring it back in full force.

A release date has yet to be set, so the Shox Ride 2 could drop at any point between now and the end of the SS22 season. At least two other color schemes should join the black version based on previous collaborations, with a strong chance of one coming in white and Supreme red. Stay tuned for more release details when the time comes.