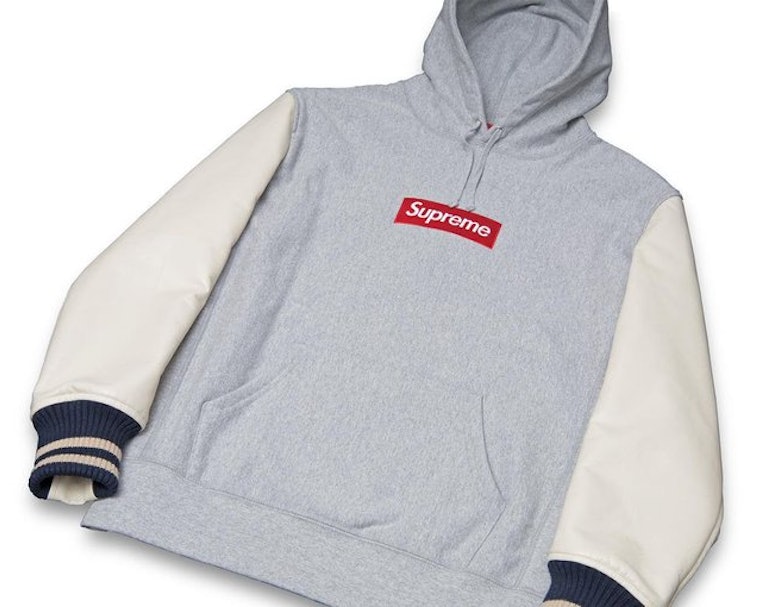 Under normal procedures, the Supreme and Junya Watanabe collection would have already came and went — but the two collaborators are doing things differently with a surprise follow-up release.

Following last week’s drop, a Supreme and Junya Watanabe have unveiled the greatest prize of all, a reworked Box Logo hoodie. The heather grey hoodie has been transformed into a varsity jacket hybrid with cuffed leather sleeves added in the style of Junya’s signature pastiche garments.

Sounds great, right? But here’s where we hit you with the bad news — the Junya Box Logo hoodie is slated to release a Japan exclusive. Getting one stateside won’t exactly be impossible, but expect resale prices to climb even higher than usual because of the limited nature of its release.

Got a plug in Japan? — Junya Watanabe’s Box Logo hoodie will release this Saturday, November 13, exclusively through Comme des Garçons stores in Japan for ~$745. An online release for the hoodie-varsity hybrid hasn’t been announced either, meaning you can’t even enlist a proxy service as a workaround for the super exclusive drop.

We were already a big fan of Supreme’s collaboration with the cult-favorite Comme des Garçon line as soon as it was announced last week, but the new hoodie trumps everything else as the perfect collision of the two brands. Sure, a patchwork military puffer jacket is cool — but when it comes to Supreme, you just can’t top the appeal of the Box Logo.

Should your obsession with Supreme and Junya’s surprise release rise to the level of “must cop,” we’ve got two bits of advice: have a lot of money, and keep your eyes peeled on resale platforms for someone more than happy to make you part with a nontrivial sum.