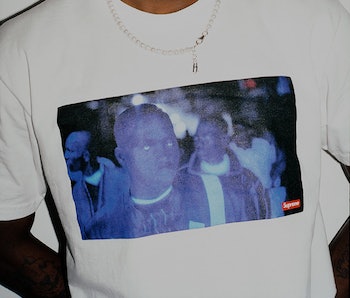 Supreme is preparing to drop its seasonal collection of T-shirts this week, and there’s one tee that clearly stands above the rest. DMX and Nas make an appearance through a still from the opening robbery scene in Belly. The same image from the cult classic film was used for a GORE-TEX shell jacket released at the beginning of the season, and in wake of DMX’s passing in April, the T-shirt should prove to be a highly sought after memento.

“America Eats Its Young,” the tagline from Belly, is printed onto the rear of the T-shirt. The film’s title isn’t used anywhere on the tee, which makes the haunting image of “Buns” and “Sin” an exercise in “if you know, you know.”

Seven other T-shirts will release alongside the Belly homage as part of Supreme’s weekly drop at 11 a.m. ET Thursday. Supreme’s dedicated T-shirt drop is always a source of underrated graphics, and this season’s assortment is no exception.

What else they got? — Supreme has tapped three artists to contribute original artwork for the T-shirts, including Stash’s “Support Unit” tee. The legendary graffiti artist has long been friends with Supreme team members but this season marks the first time he’s worked with the brand in an official capacity. In an interview with Complex, Stash said Supreme’s designers showed him how they had referenced his early work and added: “I feel really good about that. They’re a really good crew to work with and everything was amazing as you hope it would be. I wish I had two more hands so I can give them four thumbs up.”

Weirdo Dave, an artist known for his collages and no stranger to streetwear, pulled charged words from newspaper headlines for his “Monster” T-shirt. And for a more light-hearted affair, artist and former Powell-Peralta designer Sean Cliver created a formula car crash in a cartoonish style.

Rounding out this week’s lineup is a distorted patchwork “Face” tee, a “Sticker” tee with a minuscule graphic with Japanese text, a “Connected” shirt with backward lettering, and a Charlie Brown-esque “Rocker” graphic. As always, you’ll be able to get each of the T-shirts through Supreme’s website and physical stores this Thursday — and each will be available in a range of colors that’ll give you a legitimate chance at actually buying one.