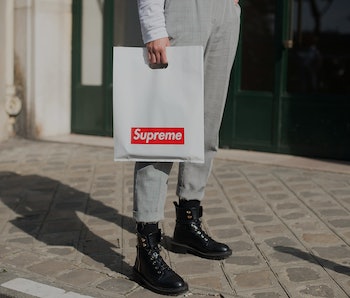 Supreme, the streetwear brand known for its exclusive branded offerings, may start limiting its products even more. According to a report by Bloomberg, Supreme’s parent company VF Corporation is facing supply chain disruptions that are disproportionately affecting the streetwear brand.

Nearly every aspect of the global supply chain — from manufacturing to transportation to logistics — has been disrupted by the pandemic at this point, causing product delays and price surges. In southern Vietnam, where VF Corp reportedly manufactures about 10 percent of its products, COVID-19 has caused shipping delays and constrained production capacity. During the upcoming months, you can expect less products bearing Supreme’s signature red and white branding, possibly alongside inflated prices.

Supreme gets smaller — Already, manufacturing hiccups have interfered with Supreme’s drop model, which arrive almost weekly on Thursdays to satiate shoppers. Bloomberg reports that in the past few weeks, Supreme’s inventory per drop has declined nearly 33 percent, with some planned releases falling through.

In May, the streetwear brand delayed its release of reclinable lounge chairs, citing a “last minute unsafe manufacturing flaw.” Given Supreme had already launched a number of seating options, including a smaller lawn chair, a director’s chair, and a metal folding chair, fans seemed confused on how the unreleased chair was defective — and many predicted the product would never release. As VF Corp now struggles with supply chain issues openly, it looks like fans are right. More Supreme products will probably see the same fate as the unreleased chair.

In the long run — Looking ahead, VF Corp will be “sourcing closer to where the distribution points are,” CEO Steve Rendle told Bloomberg. But for now, limited inventory means shoppers have to wait in even longer lines, or hasten their online checkout speed, to secure their Supreme goods.

Heightened scarcity may also lead to higher prices for both retail and resale, perhaps hyping up the streetwear brand even more. VF Corp’s other brands — which include The North Face, Vans, and Dickies — may not see the same favorable outcome.

Still, the parent company expects to bring in approximately $12 billion in fiscal year 2022, $600 million of which Supreme is predicted to generate. “As we move through the halfway point of our fiscal year, I remain encouraged by the underlying momentum across the portfolio," Rendle told Bloomberg. “Our ability to reaffirm our Fiscal 2022 revenue and earnings outlook is a clear testament to the resiliency and optionality of our model.” For now, Supreme isn’t going anywhere — you just need additional funds and finesse to score it.