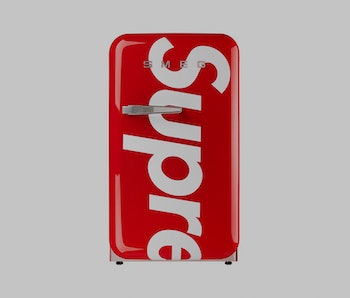 When Supreme first unveiled earlier this year its preview for its spring / summer collection, the bright red mini-fridge was an instant highlight and even worthy of being included among the best Supreme accessories of all time. This week, finally, it’ll go up for sale.

The vintage style mini-fridge is made in collaboration with the Italian brand Smeg, which specializes in ’50s-era appliances. Post-war boom meets the era of hypebeasts with their dual-logo adorned refrigerator, which applies an oversized “Supreme” down the length of the door and beneath Smeg’s chrome lettering.

Jokes write themselves for the inevitable owners of the Supreme mini-fridge, and we have a clear image of them stocked sparsely with, like, Travis Scott’s spiked seltzer and vaguely identifiable produce covered in mold. But while it's instant fodder for a fuccboi, it’ll also only be in the budgets of the richest among them.

It’s actually a great fridge — Beyond bearing the most covetable logo of modern times, the mini-fridge is also a damn fine machine. LEDs light the interior, and absorption cooling is both energy efficient and helps to minimize noise. And at just over 29 inches of height and 19 inches of width, the fridge can hold a nontrivial amount of goods.

Without Supreme involved, Smeg’s mini-fridge is a tasteful and nostalgic appliance that commands a nearly $1,000 price tag. With Supreme involved, it’ll jump to $1,300 — and we’ll let you decide what effect the Box Logo has on its tastefulness.

Don’t expect many to release — Supreme accessories of this ilk are typically even more limited than Supreme’s usual goods, to the extent that there may only be 100ish units made. Of those, an even scarcer number are likely to go on sale to the public, which means you’ll have to be even luckier than you are flush with disposable income to land one.

You’ll be able to try your odds during Supreme’s weekly drop at 11 a.m. this Thursday, May 13, through the brand’s website. And if you are lucky enough to acquire a mini-fridge, please do your best to stock it properly and avoid the tropes of hypebeasts who spend their money on everything but the essentials.