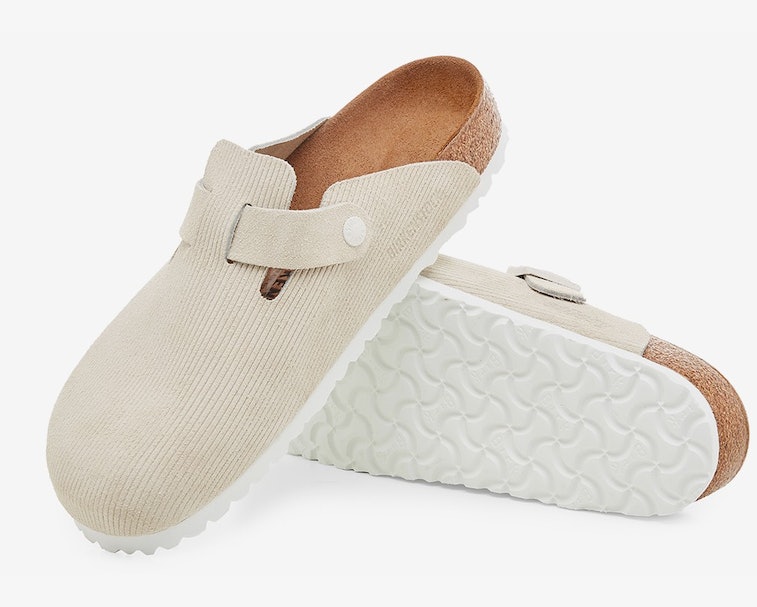 Birkenstocks are back. The fuss-free mule favored by old people and proto-hippies has been taken on by a variety of collaborators in its rise to bonafide fashion staple. And while they were already trending upwards, Birkenstocks could not be more suited for this moment when the pandemic renders anything but casual attire unnecessary. Slip on a pair of Birkenstocks as you pace around the house or slip out for a hot second and you're good to go.

Stüssy has had an intermittent relationship with Birkenstock dating back to 2005, and now they're reunited for a pair of Bostons done up in corduroy. The tried-and-true silhouette gets a suede treatment on the lining for a mule that's plush inside and out. Both the "Bone" and "Anthracite" cord colors pair nicely with Birkenstock's cork soles to create a pair of earthy kicks.

Stüssy's on a roll — Stüssy is as surefire a bet as you can get in streetwear, and the seminal brand has enjoyed a particularly good year when it comes to footwear. The Nike Air Zoom Spiridon Cage is still one of the best sneaker releases of the year, and it was followed up by the revival of the Air Kukini along with a bangin' range of apparel.

The Birkenstock collaboration arrives to throw a bone — no pun intended — with sneaker fatigue. While the mules will no doubt have a raised profile because of the Stüssy connection, they should be much easier to secure than the Spiridons. They'll also breathe some fresh air into your wardrobe, especially if you haven't gotten down with the #mulement already.

Branding is kept to a minimum, with Birkenstock's name debossed on its usual place on the medial heel and Stüssy on the opposite end.

Birks are hot, too — Everywhere you look, fashion has seemed to get more crunchy. From tie-dye and Deadhead merch (bootleg and official) to a wider embrace of sandals, dudes are starting to dress like their favorite scent is patchouli. Perhaps it's a way to feel more grounded in an increasingly digital world, or perhaps it's entirely for show. Either way, it feels like it's Woodstock all over again.

Birkenstock's popular Boston and Arizona silhouettes provide a comfortable and breezy fit that can be easily tossed on and off without exposing toe. That kind of reveal still provokes debate on whether it's appropriate or not for men, so wearers can hedge their bets with a pair of Birks. And by wearing them with socks, they can be rocked well into the cooler months instead of being relegated to summer exclusively.

Dropping this Friday — Both of these cord Birks will release through Stüssy and Birkenstock's webstores, as well as select retail locations. The price has yet to be announced, but it shouldn't get much higher up than the typical $135 to $145 range for Bostons. How high you look yourself just depends on how you style 'em.