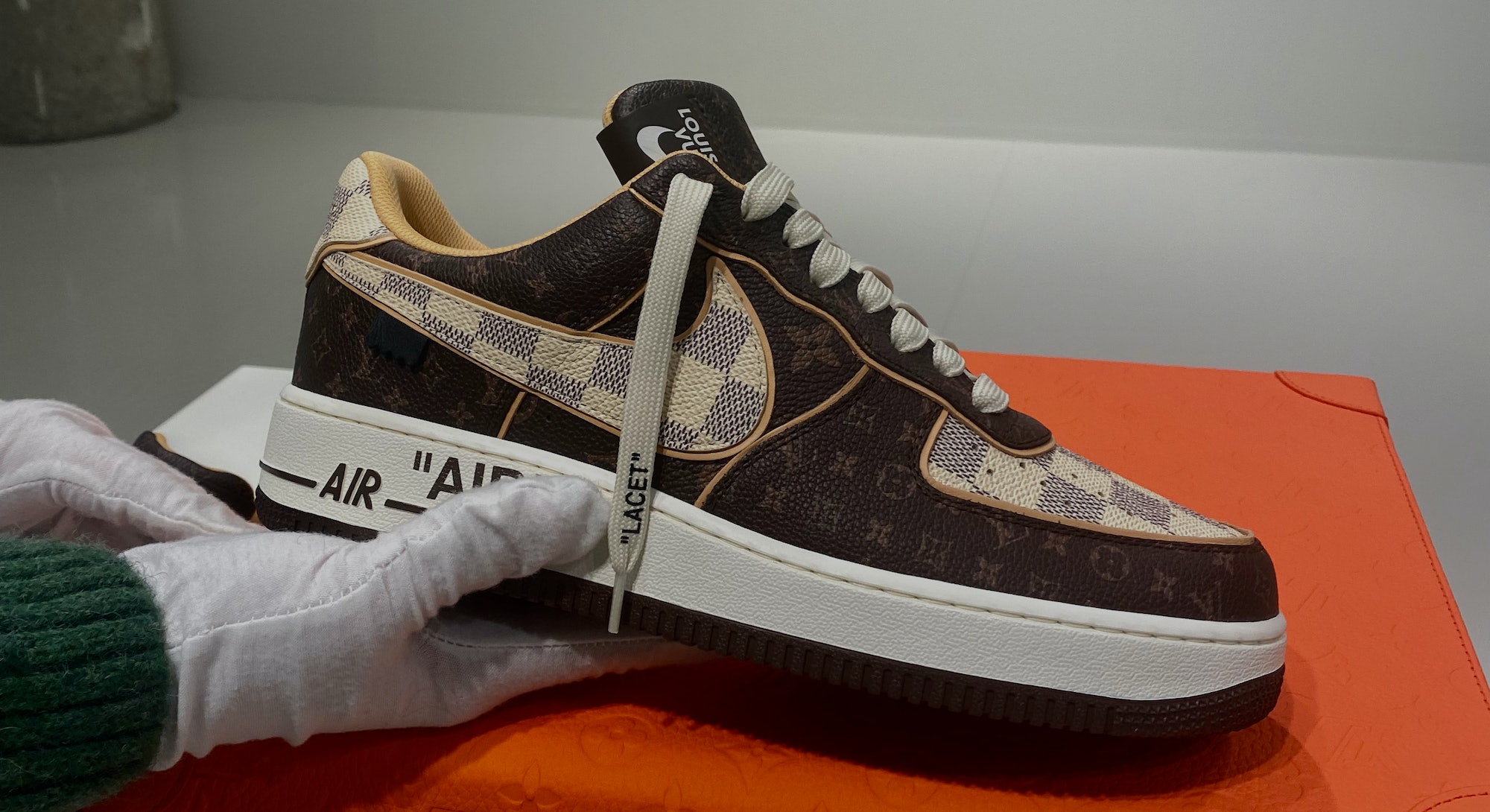 Streetwear isn’t what it used to be. Historically a product of hip-hop and skater culture from the ‘80s, ‘90s, and early 2000s, the fashion subculture created a community that welcomed everyone, regardless of social or financial status.

But as brands like Supreme have become mainstream, the streetwear industry is now valued at about $185 billion — and suddenly everyone’s eyes are on it, from high fashion labels like Gucci and Prada to auction houses such as Sotheby’s and Christie’s.

Because of widespread interest in streetwear, pushed far by celebrity cosigners and a more casual global dress code, it’s become increasingly difficult to buy even a widely known and mass-produced sneaker like the Nike Air Jordan 1. And when luxury brands create limited-edition collaborations that bridge high fashion and casual wear, that inevitable exclusivity ends up on the auction block to be bid on by collectors, enthusiasts, and even resellers. There’s money to be made in streetwear, and individuals and companies alike aren’t wasting any time trying to squeeze as much out of it as they can.

Recorded as early as 500 B.C., over time auctions led to the diplomatic sales of luxury goods, antiques, housewares, fine art, and, most recently, pairs of Nike sneakers and skateboard decks. Though major auction houses like Christie’s, Sotheby’s, and Phillips — and newer companies like StockX, eBay, and GOAT that have a similar bidding model — have a strong grip on secondary luxury fashion sales, the introduction of streetwear has opened them to a demographic that was once out of reach.

In the 2000s, luxury brands began to take notice of streetwear’s high-profit potential, especially since the sneaker market has grown more than 40 percent since 2004. Sneakers that could once be found at a skate shop, thrift store, or outlet mall for $40 are now lavishly swathed in monogrammed print and sold at the swing of a gavel for hundreds of thousands of dollars.

“Young collectors are finding themselves more willing to learn from this market because of what they were raised in.”

StockX and GOAT are websites that allow buyers to participate in a contemporary form of auction. Because they were able to pave a new interest in selling items using traditional bidding methods, established houses like Christie’s and Sotheby’s are using this to their advantage and tapping into the market.

Caitlin Donovan, Head Of Sales, Handbags, Streetwear & Sneakers at Christie's, explained that there isn’t a single, defined buyer or collector in this space, but the recent uptick in streetwear’s value has presented a newfound interest from young buyers. “Buying a piece of art from Christie’s can seem intimidating,” she told Input in an interview. “But the secondary sneaker market is very established and the young collectors are finding themselves more willing to learn from this market because of what they were raised in.”

Auctions’ interest in streetwear has made that space more accessible and mainstream, especially as more of these houses hold online-only auctions. One-third of new buyers at Christie’s are millennials and two-thirds enter through online sales, the auction house reported to CNBC. At Sotheby’s, 55 percent of clients are new, while 65 percent are in the 20- to 40-year-old age bracket, Brahm Wachter, Sotheby’s Head of Streetwear and Modern Collectibles, told Yahoo.

Late last year, Christie’s held an online-only auction called Handbags x Hype: The Luxury Remix, which amassed more than $2.9 million. The event was intended to track the luxury industry’s shifting gaze toward streetwear, including a selection of sneakers, vintage arcade games, and more.

Michael Jordan’s game-worn and signed Air Jordan 13 sneakers from his last game during the 1997-1998 Chicago Bulls Championship season was a highly coveted piece, selling for $375,000. Two complete sneaker collections, including Virgil Abloh’s Off-White x Nike sneakers and Kanye West’s Yeezy 350 sneakers, sold for $62,000 and $37,500, respectively. Kanye’s name was also attached to another item: a signed Donda vest from an Atlanta listening party in 2021 that realized $75,000 at the auction.

For some collectors, the luxury streetwear auction boom is based on nostalgia and wanting to feel connected to their heroes, like Michael Jordan. Those that couldn’t afford a certain sneaker or high fashion brand in their youth may now have the financial means to buy a collaboration that can now only be found at an auction. And for younger generations, rarer pieces might be viewed as a long-term investment.

Nick Engvall, founder of Sneaker History and overall streetwear enthusiast, explained that the rise of streetwear's monetary worth is driving many of these younger buyers to invest. “We’re seeing that the average 16-year-old might spend five times as much as maybe I did at 16 years old on sneakers, streetwear, clothes, and skateboard stuff,” he told Input in an interview. “But most of the things that they’re buying hold their value much longer than anything I were to buy at that time.”

Buying a valuable piece of streetwear history is like having a savings account if the piece retains its value.

In a way, buying a valuable piece of streetwear history is like having a savings account if the piece retains its value, especially when it has societal worth as well. Auction sales from Sotheby’s Louis Vuitton x Nike Air Force 1 sneaker collection by Virgil Abloh reached over $25 million, just two months after the late designer passed. Though the proceeds benefited Abloh’s “POST MODERN” scholarship fund, the average price for a pair was $126,000.

At the same time, a pair of Nike Air Ship sneakers worn by Michael Jordan sold for $1.5 million and a Nike Air Yeezy sneaker from Kanye West’s 2008 Grammy Awards performance sold for $1.8 million in 2021 at Sotheby’s, the highest sale price on auction shoes ever.

These sales reflect that the interest in historical streetwear is very much present, and Engvall describes it as a form of generational approval. Buyers often feel nostalgic about those cultural moments in time and their own professional success allows them to buy these cultural assets that they value.

“When you think about what Nike or Supreme does, I would say 90 percent is still released in a way that is actually affordable.”

And the lifespan of the item isn’t over after it gets sold, if anything its value only continues to rise. Kanye West’s aforementioned Donda vest changed ownership three times, rising in price each time until its most recent $75,000 sale. Nike’s Louis Vuitton sneakers sold for hundreds of thousands of dollars, but their value has probably doubled in the process. Sotheby’s also auctioned Kobe Bryant’s 2006 jersey, the first sports memorabilia from that game, proving that there is a multitude of moments that can be archived and sold.

Though streetwear itself is built on accessibility and community, Wachter isn’t worried about the legacy of streetwear as it becomes more exclusive. “When you think about what Nike or Supreme does, I would say 90 percent is still released in a way that is actually affordable,” Wachter told Input. Spending thousands of dollars on a collectible may put the item out of reach for the average consumer, but they’re initially released in a way that’s accessible — even if that accessibility is skewed by resellers, bots, and overall limited quantities.

And while not every buyer will have the means to secure a Basquiat painting, Kaws sculpture, Bearbrick, or Louis Vuitton sneaker, the abundance of these names, images, and likenesses has helped streetwear maintain its rebellious and original core. “Truly it just opens up the opportunities for other brands to step in and be affordable and localized brands to create cooler stuff that’s not as expensive,” Engvall said.

Ultimately, as streetwear’s dollar sign continues to rise, everyone wants to drink from its gold fountain. But with every release and historical moment that gets sold to the highest bidder, is the fountain on its way to running dry?