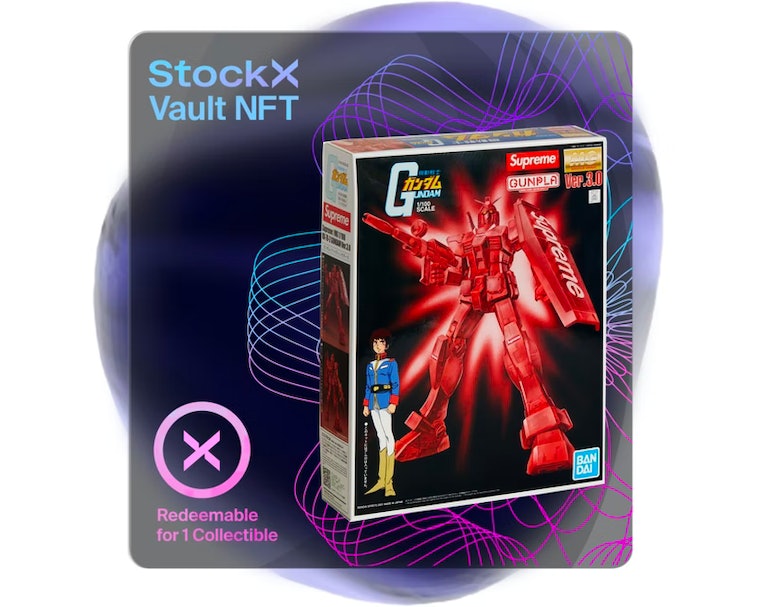 Nike’s NFT lawsuit against StockX is still ongoing, but the potential legal ramifications aren’t stopping the resale platform from cloning another brand in the metaverse.

Today, StockX released NFTs for the Supreme x Gundam action figure, a real-life product that released late last year. 100 tokens were made available for $150 each at 1 p.m. ET, each one of them representing one of the model kits kept in possession of StockX. Owners of the NFT can sell it to someone else or redeem their token in exchange for delivery of the product, upon which the NFT will be removed from the holder and from circulation. (Secondary sales for as much as $280 had already begun within 15 minutes of the launch.)

Regardless of how much you buy into the gimmick of StockX tying its NFTs to tangible goods in its possession, this latest move raises eyebrows for its risk of drawing more legal scrutiny. Supreme is extremely protective over its image and has successfully secured its trademarks in China and the European Union after years of effort. The prospects of the New York City-based streetwear brand overlooking a potential violation by StockX are unlikely, especially now that it has the powerful VF Corp. as its parent company.

Will Supreme go back to court? — The primary antagonist in the lengthy legal battle over Supreme’s IP was Supreme Italia, the bootleg brand whose masterminds were given multi-year jail sentences and ordered to pay $10.4 million in fines. Prior to Supreme triumphing in court, Supreme Italia had opened several stores in Beijing and Shanghai to hawk its fake goods and even duped Samsung into announcing a collaboration with the bootleg brand.

Upon releasing a series of sneaker NFTs composed almost entirely of Nike designs, StockX made it just two weeks before being hit with a lawsuit by the sportswear giant. Nike has accused StockX of trademark infringement and trademark dilution, with the suit laying out in detail how the resale platform has engaged in “blatantly freeriding, almost exclusively, on the back of Nike’s famous trademarks and associated goodwill.”

Similar accusations should be easy for Supreme to level against StockX now that its own designs have been hijacked in the metaverse. Bandai, the owner of Gundam’s intellectual rights, could very well get involved, too. At this point, you almost have to marvel at how brazen StockX is in its efforts to cash in on NFTs with nary a creative idea of its own.