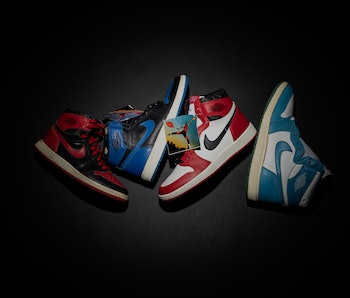 Stadium Goods and Christie's have teamed up again to debut the largest online sneaker auction ever held at the auction house, entitled “Original Air Takes Flight: The Evolution and Influence of Air Jordan Sneakers.” A whopping total of 90 sneakers, including rare early samples, a complete set of Original Air Jordans 1-14, and game-worn shoes, will be available for auction and viewing throughout the month.

Christie’s has already made history with Stadium Goods, auctioning off “the greatest collection of historic Jordans” back in 2020. The much smaller lot included 11 game-worn and player-exclusive sneakers from Michael Jordan's career, of which one pair sold for $112,500. But with “Original Air Takes Flight” featuring additional pairs from His Airness, Kobe Bryant, Lebron James, Derek Jeter, Drake, Eminem, and more, we imagine the upcoming sale will rake in similar, if not greater, bids.

Considered the only existing sample, the Air Jordan 2 pair was likely one of the very first iterations of the second signature model. The Air Jordan 1 salesman’s sample, on the other hand, was used by a Nike rep in order to promote the first-ever signature Jordan shoe in 1985. Accompanying the rare pair is a vintage Nike-branded briefcase believed to belong to one of Nike’s early product specialists, who were called “EKINs” — Nike spelled backward.

Other pairs included in the extensive collection are pairs exclusively worn by Jordan such as the Air Jordan 11 “Concord,” Air Jordan 12 “Taxi,” Air Jordan 13 “He Got Game,” and Air Jordan 17. Sneakers autographed and worn by other sports legends, including BJ Armstrong, Charles Barkley, Kobe Bryant, LeBron James, Derek Jeter, Russell Westbrook, Ray Allen, and Jimmy Butler are up for bidding too.

Sneaker samples from collaborations with Eminem and Drake have been incorporated into the mix, as well as highly coveted commemorative pairs like the “Friends and Family” exclusive Air Jordan Kobe 3/8 Pack, Air Jordan 1 “Colette,” Air Jordan 16 “Veterans Day” and “Board of Governors,” and an Air Jordan 7 “Hare” sample featuring rare crocodile-textured panels.

Check out the collection through a (free) viewing — Although we can’t afford any of Christie’s 90 offerings — props to you if you can — the “Original Air Takes Flight” auction is available for viewing online starting June 4. You can also drool over the exclusive shoes in reality from June 4 to June 9 via appointment only, while those with the means can bid on the sneakers from June 22 to June 30.