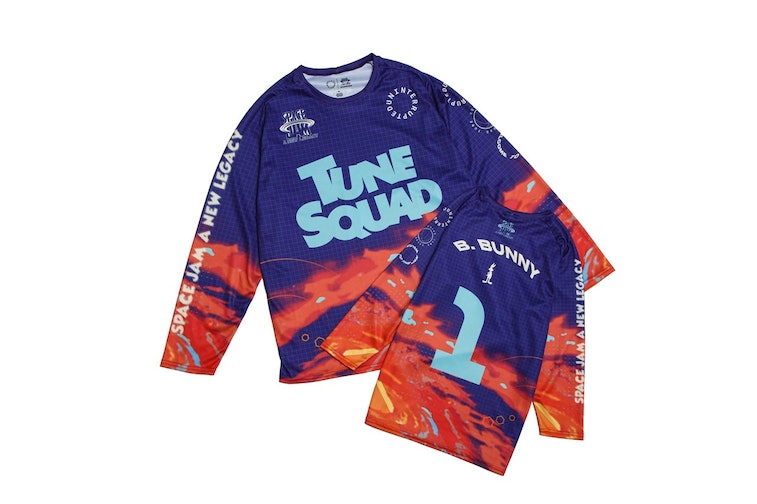 There will never be a better piece of Space Jam merchandise than the Air Jordan 11s Michael wore for the movie, but with a sequel will inevitably come a new onslaught. Along with Warner Bros., LeBron James’ Uninterrupted platform is kicking off the branding exercise with a Space Jam: A New Legacy gaming jersey.

With the James-starring sequel still months away, you can safely bet that this is just the beginning of a whole lot of merch. The decision to launch with a jersey for e-sports is somewhat bewildering and totally disappointing, though, considering it's a basketball flick. Certainly, there’s a significant intersection of gamers and hoops fans — but a proper basketball jersey would be much more desirable.

Hope you like Bugs — Another disappointing development is that the Space Jam gaming jersey is only available with Bugs Bunny’s name on the back. James’ name would seem like an obvious starting point, and there are numerous other characters that can and should be involved. Perhaps they’re being saved for actual basketball jerseys to come, which would be the only sensible explanation for the oversight.

An all-over print mixes cosmic graphics with a grid pattern in honor of A New Legacy’s setting in the servers of Warner Bros.’ intellectual property. On the chest you’ll find logos for the film and Uninterrupted, along with “Toon Squad” appearing as the team name. A very trendy sleeve treatment features several logos on the left side, while the film’s title is spelled out along the right. Rounding things out is a “1” on the rear with a silhouette of Bugs himself atop the number.

Get it now, or better yet wait — Uninterrupted’s Space Jam jersey is available now through its website, with kids sizes selling for $60 and adults coming in at $95. Delivery may take two to three weeks, which could very well be enough time for more and better Space Jam merch to come along and make you regret your purchase.

Our advice: sit tight and wait for more options. The kid in you will likely drive you to buying something for the film, and by the time the July 13 release date comes around you should have no shortage of options.