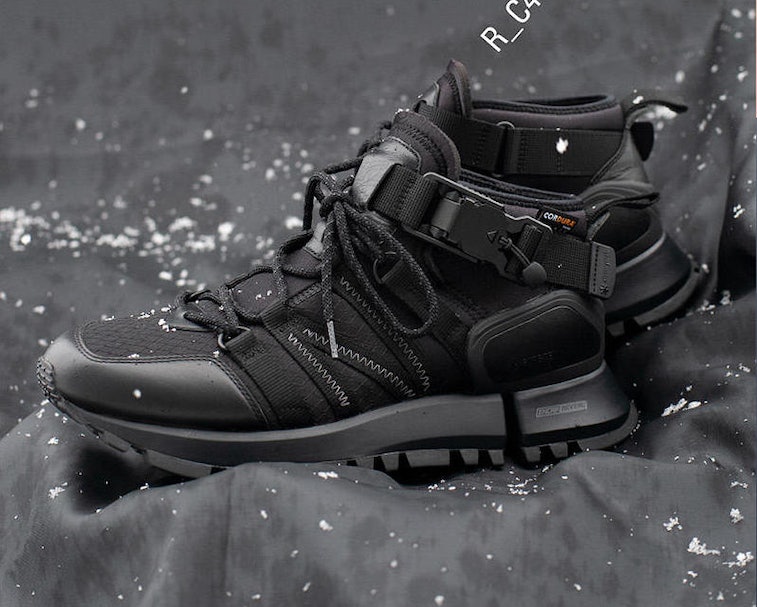 Following up on the unmistakable heat that was the Niobium Concept 1, Snow Peak and New Balance's Tokyo Design Studio have teamed up once again on a rugged outdoor sneaker.

Before the three-in-one boot, sneaker, and mule that won our adoration, the brands created the Extreme Spec R_C4 for ice excursions and other mountain adventures. Now, they've updated the silhouette for slightly less extreme conditions and in a successful bid to make it apt for city life as well. But make no mistake, this still an absolute unit — a mean sneaker boot hybrid good for where gorp is needed.

Besides a murdered-out color scheme, the primary update comes in a retooled upper that opts for premium leather instead of rubber. These two adjustments will make the Extreme Spec R_C4 stick out a tad less as part of a normal fit, and it's still got the same high tech as its predecessor.

Buckle up — Snow Peak and Tokyo Design Studio have brought in a quartet of outside manufacturers that specialize in distinct and well-known components of the best gorp around. The standout design feature on the Extreme Spec R_C4 stick is a robust Fidlock buckle that secures via a magnet and is easy to use with one hand or in poor visibility. Gore-Tex contributes a lining stitched to the Cordura ripstop upper for breathable waterproofing, and the party is completed with a Vibram outsole that's grippy on the trail and in slick conditions.

Coming from New Balance proper is an upgraded Encap Reveal midsole, which now uses Abzorb cushioning to add even more cushioning balanced out with stability. Abzorb brings together a comfy and compressional foam with rubber for a high degree of shock absorption and energy return. It was also used in the Niobium Concept 1, which is much more comfortable than it looks.

Kicking off in Japan — Snow Peak and Tokyo Design Studio initially announced the Niobium Concept 1 for release only in Japan, and our prayers were answered when it came to the States shortly after. And once more, we must put our hands together in an attempt to actualize our technical kicks dreams.

For now, the Extreme Spec R_C4 is only slated to release this Friday, February 19, through Snow Peak's Japanese stores and website. If you're impatient, you could utilize a proxy service to secure a pair straight away — but in all likelihood, patience will be rewarded soon with a wider release. Expect it to come in around $400, which was what the initial version sold for when sold directly for dollars.