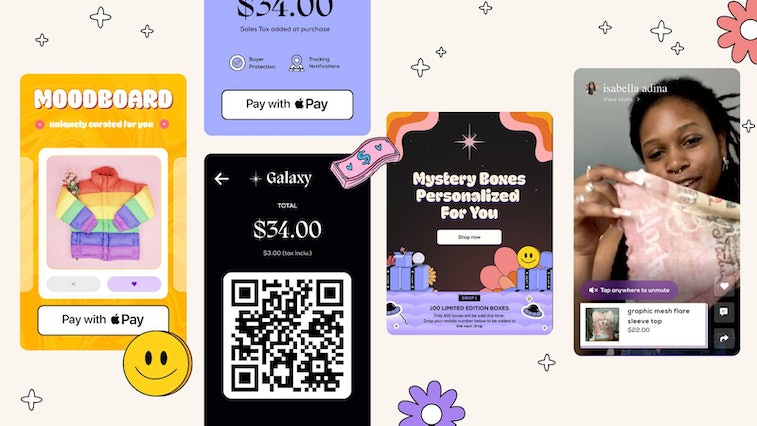 Online thrifting has grown immensely over the past two years, thanks to the influence of TikTok and people’s desire to shop more sustainably. Apps including Depop and Poshmark have seen success despite the looming recession, influencing retail stores including Urban Outfitters to launch their own thrifting platforms.

Taking this growth into account, Snapchat owner Snap Inc. is viewing resale as a good investment. Alongside RGH Capital, VC firm Homebrew, and venture firms Floodgate and Banana Capital, Snap Inc. has contributed to a $7 million funding round for Galaxy, an app that allows influencers and store owners to sell secondhand clothing and accessories.

How it works — Like other existing thrifting apps, Galaxy allows people to create stores on its platform — but rather than displaying photos of an individual’s items, stores will feature videos of the seller showcasing each product. According to the Business of Fashion, the video-focused model is inspired by China’s livestream commerce, where influencer-hosted streams draw in sales from their online communities and fans. Online retailer The Lobby also uses video content from influencers as the main media on its website.

Galaxy’s business model blends shopping and entertainment, “making the experience of the resale more enjoyable,” founders Danny Quick, Nathan McCartney, and Brandon Brisbon told BOF. Like Instagram and TikTok, Galaxy sellers can go live on the app, encouraging users that have tuned in to purchase their pieces in real time. Sellers can also upload pre-recorded videos showcasing their products.

Where the $7 million comes in — The platform’s recent funding will go towards developing its machine learning capabilities, allowing it to improve personalized product recommendations. The investment will also help Galaxy recruit more sellers including brands. Galaxy has already brought on TikTok influencer Maddie White, who boasts 2.7 million followers on the social platform.

To compete with Depop, Galaxy will offer lower commission fees per sale, McCartney told BOF. As of now, the platform doesn’t charge its 500-plus sellers to use its features, but it plans to drive revenue by charging a flat fee of $15 to $20 per month.

An influencer-focused future — Real-life retail events have helped Galaxy grow its network of sellers and shoppers, Quick further told BOF. The platform has already hosted “closet cleanout” pop-ups in New York and Los Angeles, where high-profile sellers invited their followers to shop their wardrobes and come meet their favorite influencers. Attendees were also encouraged to bring their own clothes and sell them in person, either for cash or credit on the app.

Galaxy’s investment in the growing influencer market seems to be a sign that other companies will follow suit. A large percentage of young people — i.e., shoppers with disposable income — are already on apps like TikTok and Instagram, which make it easier than ever to become someone with influence and subsequently, be influenced. Soon enough, viral videos could lead to viral sales.