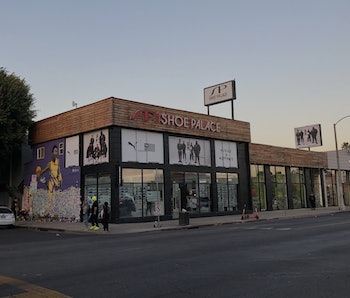 A 26-year-old man who worked at Shoe Palace was shot and killed Thursday during a dispute over a sneaker raffle.

Employees at the store in Los Angeles’ Fairfax neighborhood told KTLA5 that Jayren Bradford, the victim, was trying to mediate a dispute amongst a group of people in front of the store. Police have since arrested a suspect, a 16-year-old boy who remains unnamed.

“Jay came from his car and he confronted them saying, ‘What’s the problem? What’s the deal?’” Keyshawn Williams, a co-worker at Shoe Palace, told KTLA5. “Then everybody shifted their aggression towards Jay,” said Keyshawn Williams, a colleague of Bradford’s at the store. “And they were here with other friends, so they all surrounded him and that’s when he was shot.”

Raffles are supposed to be more safe — Sneaker raffles have become the norm in recent years as increased attention has been brought to the culture. The days of prospective customers camping out ahead of high-profile sneaker releases are largely gone, as tempers were subject to flare for the first come, first serve sales.

In 2014, New York City police had to cancel the in-store release of Supreme’s Nike Foamposite because of a riot that had broken out on the street. During that same summer, sneaker-related violence also included pepper spray being used for an Air Jordan Future release and a non-fatal shooting that occurred after someone had cut the line for another Foamposite release.

In theory, raffles should reduce the likelihood of a dispute by selecting customers by chance and making clear who will have an opportunity to purchase. No one’s life is worth a pair of sneakers, and it’s a tragedy that a man lost his life while trying to do his job because someone lost sight of that.

Where we go from here is unclear — does more need to be done to ensure safety during in-store releases? One thing that’s certain, though, is that no one should be placing this much importance in a pair of sneakers.