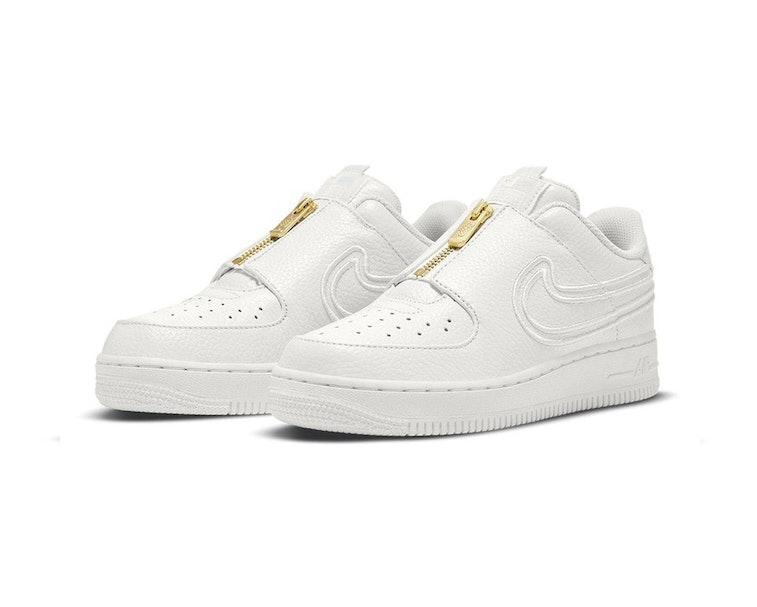 Serena Williams has momentarily stepped off the court, but she’s still putting her best foot forward in partnership with Nike. The tennis star, who previously collaborated with the Swoosh on Off-White models and Serena Williams Design Crew sweaters, is now revamping the brand’s Air Force 1 LXX sneaker.

Williams’ luxe take on the shoe replaces its sole unit with a gold zipper, giving the model an overall sleeker and cleaner look. Made for lifestyle wear, the sneaker features dual Swoosh embroidery and an all-white tumbled leather upper. Williams’ signature is stitched into the heel tab in gold, while her Design Crew logo, “10 4 01,” decorates the tongue to remind wearers of its message celebrating inclusivity, diversity, and camaraderie. Geometric graphic insoles add a hidden accent to the shoe as a crisp white sole unit completes the look.

A release date has yet to be announced for Williams’ Air Force 1 LXX, but official imagery suggests the sneaker will launch soon on Nike’s website. At $130, the collaborative effort retails for just $10 more than its original model, although its sleek details suggest otherwise.

Is the Nike sports era over? — The tennis star is one of Nike’s biggest remaining female athletes after the departures of Simone Biles and Allyson Felix. Each said their values better aligned with other brands, while Felix penned a New York Times op-ed in 2019 more clearly addressing the lack of financial support from Nike when she was pregnant. Felix and Biles are both currently sponsored by Athleta.

Just as Williams redesigned the Air Force 1 LXX for lifestyle — moving away from sports-focused silhouettes — Nike has started to introduce more entertainers into its Athletes division, most recently recruiting Megan Thee Stallion. The rapper, who cites performing and dancing as her sport, has partnered with Nike trainer Tara Nicolas on a series of Nike Training Club (NTC) workouts, while Nike has encouraged its shoppers to buy branded clothing favored by Megan.

Especially after collaborations with Drake and Travis Scott — both of which have sold out immediately, repeatedly — Nike seems more open to partnering with non-athletes and offering its current athletes more lifestyle design choices. So long as the brand’s products sell, it’s a win-win, right?