Secondhand shopping is at an all time high, thanks to the recession 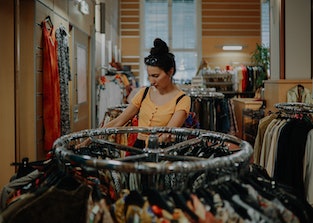 Thrifting is more popular than ever, thanks to the recession. According to a 2022 OfferUp report, published in partnership with data analytics firm GlobalData, recommerce grew nearly 15 percent in 2021. The increase marks the highest growth rate in history for the secondhand industry, which has already been spiking in popularity thanks to sustainable shopping habits and TikTok.

This year, 272 million Americans — about the same number of Americans that own a smartphone — buy and/or sell pre-owned goods, reports OfferUp. It seems finding the best deals has become as addictive as social media: OfferUp reports Americans spend an average of 27 minutes per day on digital secondhand marketplaces — just shy of the average 30 minutes they spend on Instagram, Facebook, and other social media platforms. The recession has undoubtedly influenced this spike.

Hunting for deals — As prices soar, so do consumers’ desires to save money; accelerating the adoption of recommerce. More than 50 percent of Americans reported lower prices were their top motivator for shopping secondhand, according to OfferUp’s report, while 21 percent said a reduced carbon footprint motivated them to thrift more. People aren’t just shopping for pre-owned clothing either — their secondhand purchases span from electronics to furniture and more.

Given the historic growth of the recommerce market (and the rising impacts of inflation), secondhand spending is expected to hit $178 billion in 2022 and $289 billion by 2027, reports OfferUp. Its survey reveals that over half of Americans who already use reselling platforms (58 percent) plan to increase their buying and/or selling of pre-owned products in the next year, especially given the current state of the U.S. economy. A whopping 93 percent reported to OfferUp that inflation impacts their decision to shop secondhand.

The recession has also impacted Americans’ selling habits, with many people turning to pre-owned marketplaces to create new income streams. OfferUp reports that two in five Americans sell secondhand items as a source of primary or secondary income, with higher numbers associated with Gen Z and Millennial consumers.

It’s only up from here — Not to miss out on profits, plenty of brands have already joined the resale market. Urban Outfitters, PacSun, and Fwrd were some of the first labels to launch pre-owned product lines, while others like Tommy Hilfiger and Michael Kors have followed. Even fast-fashion brands — which contrast thrifters’ sustainable ideals — have tapped into resale.

If OfferUp’s predictions are right, thrifting could be the future of fashion. And it’s something the industry desperately needs. Cheap clothing’s overproduction is strangling our planet, and its ceaseless cycle of replacement and replenishment isn’t sustainable. While thrifting has been around for decades, here’s hoping this spike in popularity can change our consumer habits for the better.