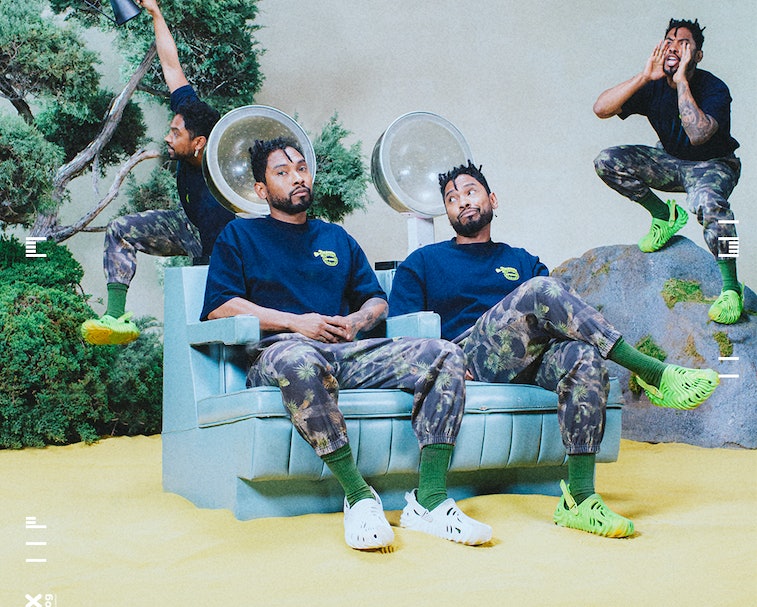 It’s official: Hot girl summer has been replaced by hot Croc summer. The rubber slippers have become immensely popular throughout high fashion and streetwear, mostly thanks to collaborators like Balenciaga, Justin Bieber, and Salehe Bembury. Each has elevated Crocs to new heights — figuratively and literally, as Balenciaga’s Croc heels prove — although Bembury in particular has brought hype to the clogs comparable to that of the sneaker market. The designer’s Crocs Pollex, reimagined with his signature fingerprint-inspired pattern, currently resell for over ten times their $85 retail price.

A few weeks ago, Bembury revealed on Instagram that the Pollex would return in three color schemes, and it seems an official launch has finally arrived. The first offering, a “Crocodile” lime green shade, was previously released (and promptly sold out) in January. The others, called “Stratus” and “Urchin,” take on a more subtle look with tonal lavender and white makeups. While the two shoes have been seen before — modeled by Cynthia Erivo and Jess Hu in a Crocs Pollex Clog campaign last November — this release marks their first time dropping to the public.

Explore the Pollex — Bembury teased his three editions of the Pollex in an earlier campaign, assisted by singer Miguel and model Sabrina Zada. Together, the trio showcased pairs of the Crocs alongside minimal yet funky backdrops, styling the slippers with geometric prints presumably also designed by Bembury. In the campaign imagery, the clogs are described as “a utilitarian exploration of form and function.”

Each Pollex features a swirl pattern made from three fingerprints merged together, giving it a more elegant look than your typical Croc. As its campaign notes, however, the Pollex is made for the outdoors. Removable nylon straps keep the shoe secure during exploration — allowing for both “Trail” use and strapless “Free” wear — as asymmetrical holes provide a more breathable fit. Bembury’s fingerprint pattern also adds more traction to the slipper as it swirls throughout the upper and outsole. Both Crocs and Salehe Bembury branding appear at the back of the clog, rounding out its design.

Here’s your chance — The designer’s trio of Crocs Pollex is set to release via raffle, which anyone can enter from May 24 at 12 p.m. ET until May 25 at 12 p.m. ET. Winners of the raffle, which takes place on the Crocs website, will be able to purchase either the “Urchin” or “Crocodile” version of the Pollex for its retail price of $85. As of now, the all-white “Stratus” iteration can only be accessed by Crocs Club Members or those willing to pay an inflated price on the resale market.