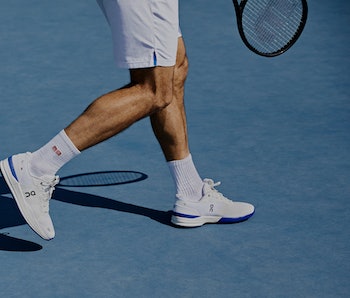 Roger Federer departed Nike for a co-ownership of On Running in 2018, but until this week he’s still been wearing Swoosh sneakers during matches without an endorsement deal. That finally changes at the 2021 Qatar Open, where Federer has debuted his first on-court sneaker for On Running.

The Roger Pro is On Running’s first tennis-specific performance shoe and the first non-Nike pair he’s worn in a match since he was 15 years old. Federer himself played a role in the sneaker’s design, a low-top cut with a foam midsole and a carbon fiber plate atop it. On Running calls the lightweight plate the Speedboard, and it’s intended to minimize the impact from landing and maximize agility. The combination of technology is similar to what Nike uses for its Next% series, which has dominated the marathon circuit.

A hardly visible cage at the midfoot will help keep Federer’s foot in-place throughout his matches, and the predominantly white color scheme with blue accents keeps the sneaker clean. Because the Roger Pro is tailored specifically to Federer, it won’t go on sale to the general public — but don’t be surprised if we see a similar performance shoe outside of the running space soon.

On Running is making moves — Oliver Bernhard, a former professional duathlon athlete, founded On Running in 2010 out of Switzerland with two other friends. The brand has since seen its profile rise as a sleeper-choice for runners, and Federer helped garner it more attention when he joined three years ago.

In addition to tailoring to the needs of runners, On Running has made inroads in sustainability. Later this year, it’ll begin deliveries for its recyclable sneaker subscription service. Subscribers will pay $29.99 a month for the super lightweight Cyclon sneaker, which they’ll be able to trade in later for the latest version. The old sneaker, more than 50 percent of which is made from castor beans, will then be recycled entirely. On Running is touting the program as “the shoe you’ll never own.”

Federer’s return to play — The Qatar Open marks Federer’s first tournament appearance in 13 months because of injury, and the Roger Pro has been in the works for more than two years.

The shoe’s last was created from a 3D-scan of Federer’s foot to ensure a perfect fit, and the Springboard carbon fiber plate is also used in On Running’s other offerings. Because tennis players put up to three times their body weight into their shoes during play, a high-density foam was used for the midsole. The platform also extends out from the shoe for stability when cutting, while the heel is made softer than the rest of the midsole for added comfort.

With its debut in play, the Roger Pro just gives us another reason to be excited about Federer’s return from injury.