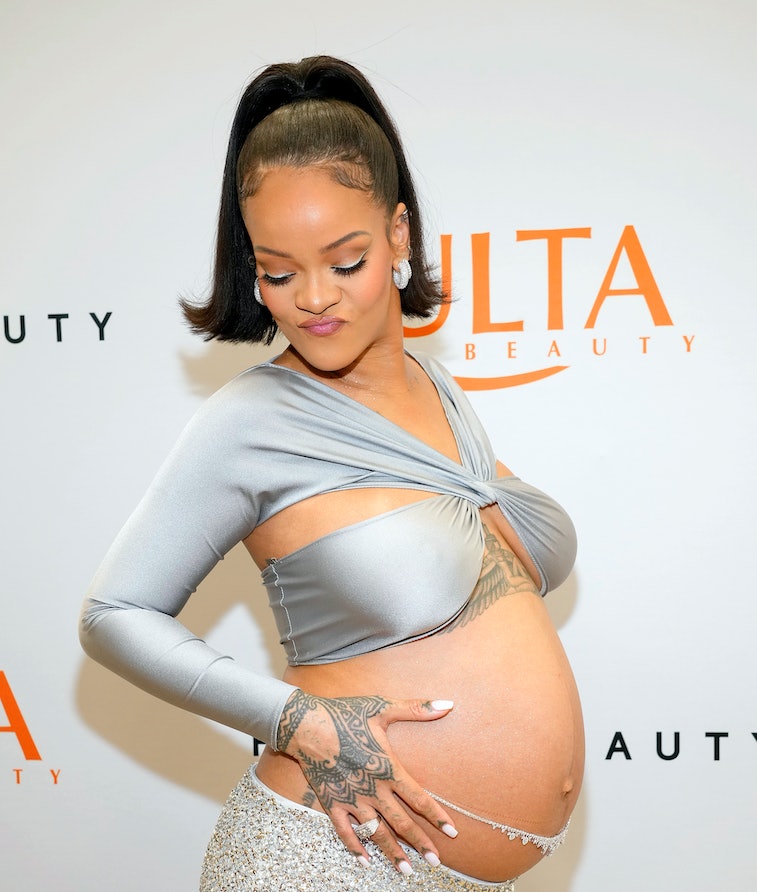 When Rihanna and A$AP Rocky announced last month that they were expecting their first child, the world stood still.

Throughout her career, the singer, activist, and businesswoman has been hounded for things like boyfriends, when her next album would drop, and when she would have children — the latter to which she would reply, “I got tons of work to do, honey” and “Y’all breed me every year, dammit.” But now her recent pregnancy is sparking all kinds of new conversations surrounding her age, marital status, and of course, her maternity outfits.

We’ve come a long way since the days when flaunting a pregnant belly was considered taboo. Actress Demi Moore faced harsh scrutiny when her 1991 Vanity Fair cover, depicting a nude photograph of her exposed pregnant stomach, was called “pornographic” by critics.

But as fashion trends shift between decades, maternity wear for the average mother-to-be hasn’t changed much. Spanx, elastic band jeans, and T-shirts with quirky phrases on them are as popular now as they were 20 years ago. But Rihanna isn’t the average mother-to-be — she has transcended her style to a level beyond Target and Destination Maternity, the world’s largest maternity retailer. And with that style transcendence comes a new wave of expecting mothers who are flaunting their bellies as they see fit.

Summer Warren, a social media influencer and expecting mother, chooses to accentuate, rather than hide, her baby bump. At 27-weeks-pregnant, Warren still dresses in cut-out dresses, crop tops, and micro-mini skirts, telling Input that “being pregnant is a very beautiful experience and nothing that we should cover up and hide from other people,” despite what most maternity brands recommend or advertise.

The maternity wear industry is expected to reach $41.3 billion by 2031, nearly doubling its $21.6 billion worth from 2021, according to a report by Future Market Insight. But recent ONS data also shows that 50 percent of women born in 1990 are child-free in the U.K., which is a drastic change compared to the 17.9 percent of women born in 1941 who didn’t have children at 30-years-old. As more women wait to conceive until a time when their career is established or their finances are secured, society is having a hard time allowing them to change the rules of how they dress.

“I’m trying stuff that I might not have even had the confidence to try before I was pregnant.”

For some people, motherhood means it's time to step away from bare midriffs and into modest conservatism. Pregnant women are often given the Madonna perspective of fragility and expected to dress like Lady Diana, clad in ruffles and oversized dresses during her expectant months.

And other women simply aren’t interested in pulling out all the stops during pregnancy. At a time when hormones run wild, feet swell up a whole shoe size, and the body puts on an average of 15 extra pounds, walking a mile in stilettos and a sheer black dress with no slip underneath may seem impossible. But Rihanna is a strong and confident role model to her fans, and per usual, every outfit she wears these days is entirely intentional. “Right now I’m really into pushing the idea of sexy. When women get pregnant, society tends to make it feel like you hide, hide your sexy, and that you’re not sexy right now,” she told Refinery29. “So I’m trying stuff that I might not have even had the confidence to try before I was pregnant. The strappiest, the thinnest, and the more cut-outs the better for me.”

Unfortunately, any disagreements on how a woman, pregnant or not, should or shouldn’t dress often lead to the issue of policing women’s bodies. One Twitter user called for Rihanna to “at least be decent,” as in modest, while another attributed the credit to A$AP Rocky, saying “Of course she’s gonna look like a fashion icon while carrying his child. I doubt he would have it any other way.”

Jane Caro, a lead at the Mental Health Foundation, said that pressure to conform to any pregnancy expectations “is potentially damaging to a woman’s mental health.” She also explained that commercial, social media, and advertising pressures on body image are “distressing” when connected to “one of the most natural human processes.”

People still don’t know how to speak respectfully to or about women, especially over 30.

While Rihanna has been open about the process, noting things like she doesn’t have to worry about “covering up [her] tummy” the way she normally would, Georgina Lawton wrote that the discourse surrounding her pregnancy shows that people still don’t know how to speak respectfully to or about women, especially those over 30.

Warren believes these negative discussions can make pregnant women feel like they’re not in control of their bodies, even while they are creating life. “Revealing attire or anything you want to wear is not reserved for young women or nonmothers,” she said. “[Motherhood] is looked at as a negative thing. Like you’re losing your youth. And now you have to give up who you are to now be a mother. I think this wave is rewriting those rules.”

But even though Rihanna is getting brand-new fashion exposure as a mother-to-be, her style really hasn’t strayed far from what she’s used to since the start of her music career. Her early 2000s looks consisted of plenty of low-rise jeans and crop tops, and her fashion portfolio has only grown as she’s sharpened her luxury eye. Using maternity style as an extension of her day-to-day looks has allowed her belly to become her main accessory, waltzing as she pleases through life and fashionably late to social events.

Other celebrities like Kylie Jenner, Beyonce, and Cardi B are also credited for their experimental maternity fashion. But while these celebrity mothers have been praised for their red carpet or on-stage looks, Rihanna has brought the maternity looks to an accessible point, causing women on social media — like Stephany Gomez and Adele Cany — to recreate her unbuttoned jeans and pink puffer coat look with items already in their closet.

As traditional maternity wear encourages women to cover up in neutral colors and put comfort and function over fashion, Rihanna is encouraging a new generation of mothers-to-be to do the opposite. Sure, her archival Chanel coats and Christian Lacroix body jewelry are from a wardrobe befitting the mother of all fashion influencers, but that doesn’t mean other women aren’t taking her cues and making maternity style their own — exposed belly and all.