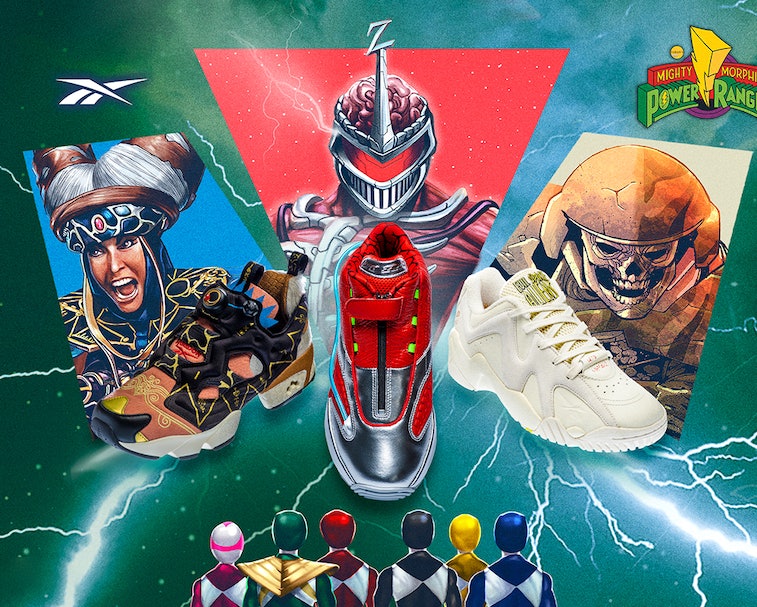 Last year, Hasbro and Reebok celebrated the Mighty Morphin’ Power Rangers with a full-family footwear and apparel collection. This time around, the two are shining some light on Rita Repulsa, Rito Revolto, and Lord Zedd, three of the Power Rangers’ nemeses. Each inspires one of three silhouettes — the Instapump Fury, the newly named Hurrikaze II Low, and the Answer IV.

Let’s hear it for the villains — As the main antagonist on the show, Lord Zedd’s likeness takes over the Answer IV with bright red and silver construction. The devil’s in the details, as the rippled leather invokes the villain’s exposed body (he doesn’t actually have skin). Lime green appears on the eyelets, and a light blue tube runs from toe to heel, just like the one attached to Zedd’s armor. He even takes over Allen Iverson’s face placement on the outsole. A villain indeed.

Rita Repulsa’s Instapump Fury is dressed in a salmon upper with black overlays. Gold and blue serve as accent shades that nod toward the space witch’s swirled robe and feathered collar. Other elements of her attire are seen on the jeweled tongue, mirroring her scepter, and the furry heel that mimics her headpiece. Rita’s shoebox even shows her in the space dumpster she’s meant to be imprisoned in for ten thousand years.

The Hurrikaze II Low’s design mirrors Rito Revolto’s own split appearance with camo print on the inside and a bone color on the outside. Messaging on the toes reads “Let’s Mamba!” and “I got a life and I’m lovin’ it,” while the tongue tags depict Revolto’s face and an “Evil Space Aliens” logo. It’s the simplest of the three, but he’s Rita’s brother, and siblings always want to be included.

Nostalgic yet? — Superfans of the show will probably catch other details hidden throughout the shoes, like Rita’s love potion motifs in Lord Zedd’s sockliner. Apparel will also be released alongside the footwear, which will be available March 25 through Reebok’s website. The Answer IV is priced at $170, the Instapump Fury at $200, and the Hurrikaze II Low at $140. And if this doesn’t make you want to stream the show’s three seasons on Netflix this Saturday morning, we don’t know what will.