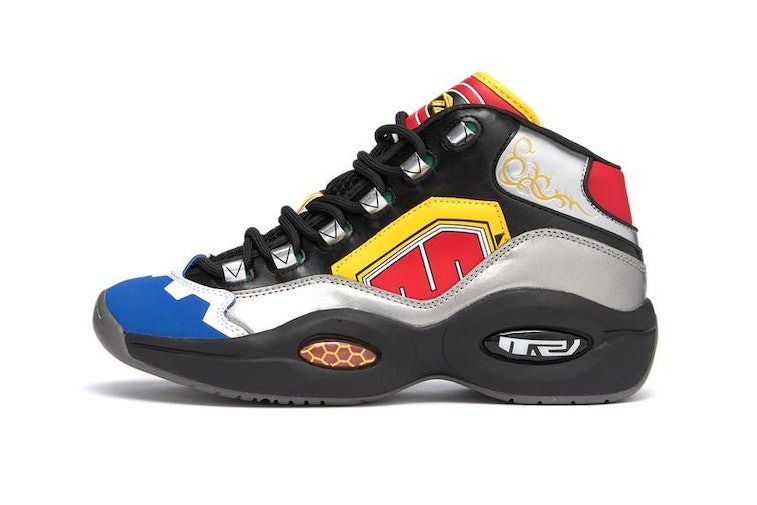 It’s morphin’ time — and playing into our childhood nostalgia, Reebok has transformed Allen Iverson’s Question Mid into a metallic sneaker bearing the colors of each Power Rangers character. For superfans of the show, the limited edition shoe includes details like Power Ranger-covered insoles, hidden quotes, and comes in an exclusive themed box.

After its split from Adidas, it seems Reebok is focused on marketing to millennials through a myriad of nostalgic designs. In just a matter of months, the brand has debuted sneakers paying tribute to Jurassic Park, Candy Land, and even ‘90s NERF toys.

By creating these one-off models, Reebok appears to have taken a page from ex-sister brand Yeezy, releasing limited and unusual shoes — catering to both exclusivity-chasing hypebeasts and those who constantly binge their favorite childhood shows. If anything, the funky sneakers are at least making headlines.

Packed with details — Fans of Power Rangers can reap the benefits of Reebok’s trip down memory lane, though, with its themed Question Mid. Bearing a metallic silver leather on its mudguards and collar, the sneaker makes sure to include pops of yellow, red, blue, white, and green to honor the Power Rangers squad (there’s no justice for Kimberly, the pink Ranger, though).

For an asymmetric look, each shoe boasts contrasting patches atop its black leather upper. On one sneaker, blue and white accents decorate the toe, while yellow, red, and blue adorn the other. Both shoes feature yellow, white, and red on their sides, with hints of green hide with the footwear’s eyelets.

If the rainbow of colors doesn’t make the theme obvious, Reebok has embellished its Question Mid with plenty of Power Rangers motifs. Metallic designs on the sneaker’s collar, heels, and sole unit bubbles nod to the Ranger’s different uniforms, while a golden dinosaur logo on the heel pays tribute to the Ranger’s morphed Zords.

Rounding out the theme is Power Rangers-covered insoles, which when removed, reveal a statement reading “Time for my funtacular, spectacular, feracious, bodacious, authophonic, morphinonic jam.” Each sneaker also comes housed in a limited edition box, which honors the series’ Japanese roots by mimicking a Japanese toy box.

For the most dedicated of fans — Getting the Power Rangers-themed shoes will prove just as much of a feat as those depicted in the show, though. The exclusive sneaker only launches in the U.K. with limited quantities available at the Sivasdescalzo boutique on June 15. North American fans of the series will have to pay international shipping, as well as a whopping $220 retail price, if they want to obtain the Power Rangers x Reebok Question Mid. Are you a Power Ranger ‘til the end?

Update: More details on the Power Rangers x Reebok Question Mid will be available via Input on July 7.