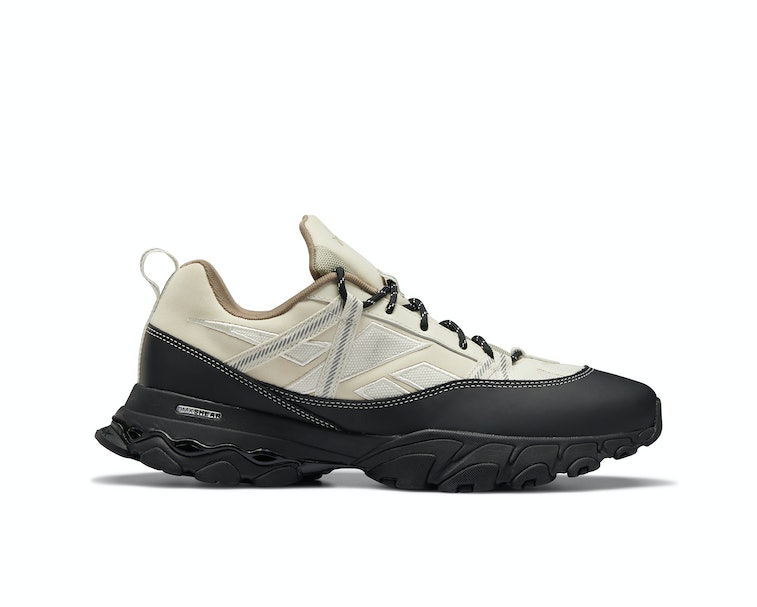 Reebok's DMX Trail Shadow first launched two years ago, marking a foray into fashion while looking to trail-running shoes for inspiration. The caged, chunky sneaker with a jagged outsole has been tinkered with by collaborators including Cottweiler, Mountain Research, and Eastlogue on its way to becoming a modest hit. Now it will move on to a new chapter, as Reebok announces a revamp for Spring '21.

Addition is met with subtraction, as Reebok removes the overlay cage to make way for an oversized mudguard as the main attraction on the new DMX Trail Shadow. Black rubber extends up from the outsole to envelop the upper and split the shoe into two distinct halves. The first iteration of the updated sneaker puts what appears to be suede, leather, and mesh in cream to contrast with the dark mudguard — and I'm intrigued by what other color combinations could follow.

The outdoors, but make it fashion — While a lot of venerable outdoor gear has suddenly become fashionable despite, or because of, its utilitarian focus, Reebok hasn't shied away from its intentions with the DMX Trail Shadow. Coming out of its in-house fashion line, the sneaker is an overt swing for the territory of statement footwear that'll never touch dirt.

The initial DMX Trail Shadow may have gone too fashion, as it frequently drew comparisons to the Balenciaga Track sneaker. It's possible that the similarity can be explained by the common thread of Demna Gvasalia, the Balenciaga creative director who's collaborated with Reebok through his own brand Vetements. But even if Gvasalia lent his ideas without his name, many sneakerheads are quick to thumb their nose at anything near a copycat.

In its second iteration, the DMX Trail Shadow does a much better job of standing on its own. Reebok's claimed references to '90s mountain gear are more clear this time around, and the new version actually looks like it could be used on a trail. And that's how it should be, because both sneakers utilize DMX Shear technology, a cushioning system that transfers air forward from the heel.

Just days away from release —  Reebok will release the new DMX Trail Shadow on January 15 through its own webstore, as well as in boutiques including Ssense, Packer, Somewhere, and Likelihood. At just $160, it comes in well cheaper than the fashionable shoes it seeks to compete with — and you wouldn't feel bad if you did decide to beat it up.