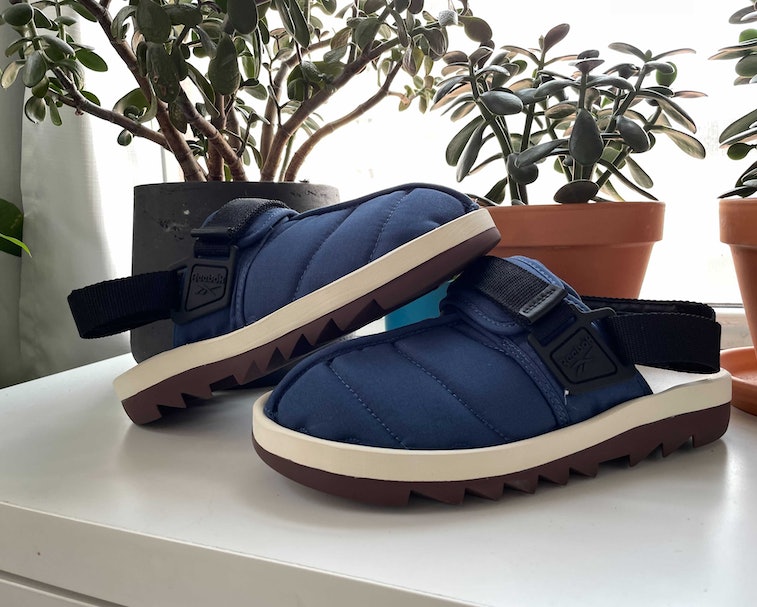 Reebok’s revived Beatnik, originally released in 1993, bridges two predominant trends of today — outdoor gear and a renaissance for men’s sandals, mules, and clogs. More mule than sandal, the Beatnik was first brought back in a more adventurousness Japanese market before re-launching in the U.S. through a collaboration with Pleasures.

The silhouette instantly grabbed our attention peculiar and retro aesthetic, and by all appearances it seems to be a great summer shoe. Nearly a year after the Beatnik made its return, I finally got the chance to wear the mule that initially sold out in many variants. But I’m sad to report that the Beatnik’s clear attractiveness isn’t matched by comfort, and I don’t see myself wearing them as much as I’d anticipated.

Reebok bills the Beatnik is an outdoor sandal, which is believable enough when you see the aggressive and signature toothed outsole. The reality, though, is that this standout feature doesn’t provide much traction. I noticed a distinct lack of grip while merely walking on gravel, and a friend’s also told me the Beatniks weren’t up to task when he wore them for a proper hike.

The shoe is more flash than substance

For many, gorp is merely an aesthetic to adopt, a way of dressing like you’re prepared for everything even though the most difficult obstacle of your day may be a delayed trend. A lack of actual outdoor utility could be set aside easily for the Beatnik, but I wasn’t all that pleased wearing them through the city either.

In a sneaker landscape when super cushiony midsoles are all but expected, the Beatnik’s stiff platform is immediately noticeable. The midsole provides sturdy support but leaves much to be desired on the comfort front. My first wear brought me on a couple-blocks walk to the park, which was a brief enough stroll not to create any complaints. But when the book I was reading led me to try and find another at two local bookstores, my fruitless but still-mild journey by foot soon became marked by discomfort.

With two sets of velcro straps a the heel and atop the foot, the Beatnik is easy to put on in a hurry — making it an appealing option when you just have to step out to the bodega or what not. And for that purpose, I can still see myself choosing the Beatnik. But if my plans for walking are any more ambitious, the mule will just create more pain than it’s worth.

The Vans Slip-On, which isn’t very advanced by today’s standards, would be just as easy to put on without much thought and is still significantly more comfortable. So too is a pair of Crocs if you’re committed to the mule-ment, while Fear of God and Alyx both have more fashionable versions that look more comfy with their own foam construction. (I have yet to wear either of the latter, however.)

I’ll hold out hope that Reebok will eventually use its Floatride Fuel foam, which I’ve worn and loved in the Zig Kinetica 2, in the Beatnik, which would solve all of its non-trial-related problems. But as is, the shoe is more flash than substance — and there are just too many better alternatives out there for me to recommend if you’re looking for casual, non-sneaker footwear.