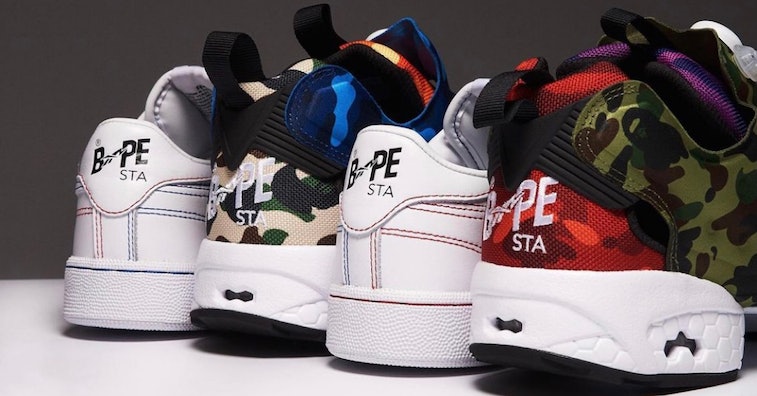 BAPE and Reebok — two brands currently relying on collaborations for profit — have efficiently decided to team up, debuting two co-branded sneakers. The first, a minimal BAPESTA-branded Club C, is tasteful, signifying hope for both retailers. An accompanying patchwork camo Instapump Fury then reminds us why the brands are struggling.

While Reebok and BAPE each have their own legacies, both are straining to maintain them. In the process of being sold by Adidas, Reebok has questionably partnered with Jurassic Park, Power Rangers, and even NERF, while BAPE’s similar string of nonsensical collaborations have cost the brand its streetwear credibility. Are the two declining brands able to lift themselves up to their former glory?

Still, there must be some consumer interest in the partnership, seeing as BAPE and Reebok have already worked together. In 2020, they introduced a co-branded Club C sneaker, complete with camouflage BAPESTA branding. Only 200 pairs were released, as the two brands sought to profit off exclusivity — perhaps the same sales technique will be applied to the next Club C and Instapump Fury.

From zero to 100 real quick — Like the previous Club C, BAPE and Reebok’s latest low-top sneaker sports the former’s BAPESTA star logo on its medial side, with “BAPESTA” written on the heel. Rivaling the Air Force 1 — which the BAPESTA sneaker is famously inspired by — the all-white Club C may be the duo’s cleanest sneaker yet, with red and blue contrast stitching accenting its upper.

The brands’ camo-covered Instapump Fury, on the other foot, is only for the bold. BAPE’s signature APE HEAD camouflage covers the eternity of the sneaker’s synthetic and fabric upper, mixing green, blue, red, orange, purple, and brown iterations of the pattern for a truly headache-inducing shoe. “BAPESTA” text, featuring Reebok’s vector logo, decorates the heel while an APE HEAD graphic hits the Pump button.

Coming soon — Although average consumers may avoid the daring shoe (to say the least), the Instapump Fury is one of Reebok’s best-selling sneakers in Japan — which doubles as BAPE’s home country. As of now, a global release date has yet to be revealed for the Instapump Fury and Club C sneakers, but they’ll likely appeal to Japanese consumers.

Those eager to get their hands on the tasteful low-top or its flashy counterpart can find both shoes at select European retailers, with a wider Reebok and BAPE release anticipated soon. Opt for the clean Club C for a classic look, or go all out with the camouflage Instapump Fury... which ironically stands out more than it blends in.