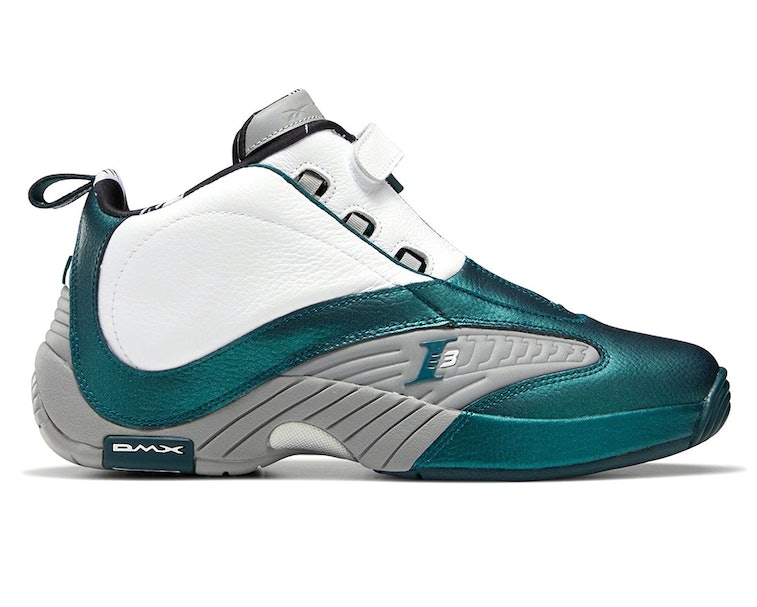 Allen Iverson is widely beloved as much for his style and swagger as his playing career, and Reebok is merging all three qualities with its latest version of the Answer IV.

Before Game 1 of the NBA Finals, A.I. showed up to the arena wearing a personalized Philadelphia Eagles jersey along with a hearty chain and a black durag with his Reebok logo. It was the very sort of outfit that would lead then-commissioner to institute a dress code in 2005 and long before regulations were once again loosened and the NBA tunnel became the new runway.

The Reebok Answer IV “Eagles” is channeling that iconic moment with a new makeup in the Eagles’ midnight green. It’s one of the more niche makeups in Reebok’s recent push for Iverson’s line of signature sneakers and easily the best shoe ever to be put forth in front of Birds fans.

A.I.’s most famous sneaker — The Answer IV holds a special place in the hearts of sneakerheads and Iverson fans because it was the shoe he wore during his most successful season. 2001 saw A.I. win the league MVP Award and make his first and only NBA Finals appearance. Game 1 of the Finals was also when Iverson made his iconic “stepover” — breaking Tyron Lue’s ankles with a crossover, burying a long two, and stepping over Lue’s fallen body in what’s considered one of the greatest (and most disrespectful) moments.

Reebok released a “Stepover” variant of the Answer IV last spring, and now the “Eagles” version becomes the second sneaker tied specifically to that momentous Game 1. Midnight green takes over the lower half of the sneaker, including the outsole and "I3" logo on the grey forefoot mold.

While I’d usually recommend against matching your fit to your sneakers, how could you not rock these with an Eagles jersey? The baggier the better, and extra kudos if you have an Iverson “3” jersey made for yourself. To land the sneaker portion of your fit, you’ll be able to purchase the Answer IV on January 21 for $120 through Reebok’s website and select other retailers.