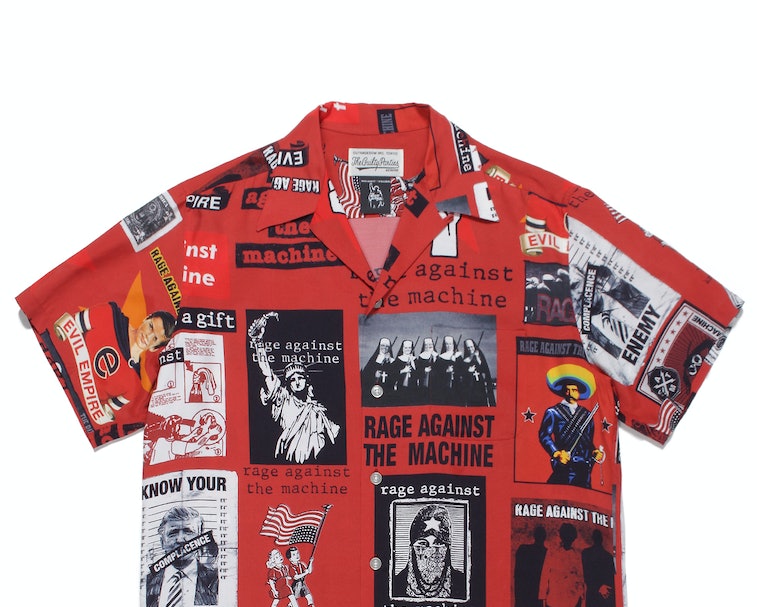 Given Wacko Maria's propensity for Chicano and West Coast-inspired designs, it seems all but inevitable that the Tokyo-based brand would work with Rage Against the Machine. That day has come with the release of a collaborative capsule featuring The Battle of Los Angeles and "Bombtrack" artwork, as well as other graphics that include an illustration of Mexican revolutionary Emiliano Zapata.

Coming after the awesome bootleg Bernie Sanders / RATM mashup — and in the middle of, you know, everything — the timing couldn't feel more right.

A grail-worthy Hawaiian shirt — Choosing a favorite graphic from the collection could prove difficult, so why not go with all of them? The Hawaiian shirt is covered in posters, some of which are inspired by real-life RATM concerts. The Zapata one, for example, is part of a series of posters from 1995 tour dates in Australia and New Zealand that included illustrations of Guevera, Angela Davis, and Huey Newton. A similar image of Guevara also appeared on the single artwork from "Bombtrack." Another song, "Know Your Enemy" is applied to an image of Donald Trump.

Camp collars are a must for the summer, so why not turn the shirt of leisure into an act of protest? Besides merely looking badass, it's a great way to signal your displeasure with the state of the country, world, etc.

Or are you looking for something less busy? — The capsule's range of T-shirts single out the Guevara and Zapata graphics, in addition to a college-inspired piece that just says "Rage." Rounding out the collection is a T-shirt featuring the iconic The Battle of Los Angeles cover. My vote is for the Zapata jawn — but, admittedly, I have a bias for la Raza.

Available right now — To be frank, buying in here requires a sort of cognitive dissonance. The Hawaiian shirt, which comes in five colors, is priced at approximately $360, while the T-shirts are set at $113 and $123. Spending that sort of money on clothing that calls for a revolution is mildly hypocritical, at best, but then again so are many of the choices we make under capitalism and, specifically, within fashion. What should soften the blow is knowing that you're getting high-quality Japanese goods in return.

If you're interested, head to Wacko Maria's web store to purchase. And consider donating to an organization that is actually raging against the machine so your support for a revolution goes beyond your attire.