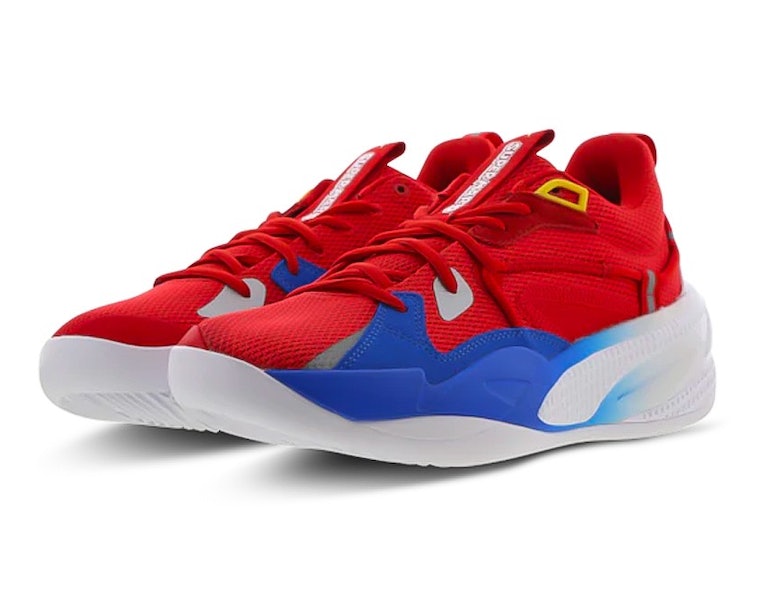 Foot Locker Australia prematurely listed a pair of the sneakers done up for the 35th anniversary of Super Mario Bros. The basketball shoe is made up primarily of red and blue as a nod to Mario's wardrobe, with a single yellow eyelet referencing the buttons on his overalls. A Super Star graphic appears on the heel, replacing J. Cole's "Dreamer" cloud, while the tongue gets the "Super Mario" logo running down vertically. Inside, you can see graphics from the game screened onto the insole.

J. Cole's shoe is rolling — After debuting at the end of July, the RS-Dreamer has already dropped in four different color variants — most of which have sold out. Most musicians' sneakers end up being lifestyle shoes, but J. Cole opted for bonafide basketball kicks after playing college hoops for St. John's University. They've even been worn at the highest level, as Kyle Kuzma and Derrick Jones Jr. have played in the RS-Dreamers inside the NBA bubble.

A push for the NBA may even be at play for Cole, as the Detroit Pistons extended a legitimate offer to try out for the team. It may be a long shot, but a rapper-turned-NBA player isn't unprecedented. Master P played for both the Charlotte Hornets and Toronto Raptors in the late '90s, albeit only for the preseason. Should J. Cole make the Pistons roster, he'll have his own shoe ready to go. This Super Mario Bros. version would even match perfectly with the Pistons uniforms.

The Mario Dreamers are dropping soon — While the 35th anniversary for Super Mario Bros is on September 13, Puma is actually dropping the sneakers on Friday, September 4 at 10 a.m. E.T. And even though there's no pricing info yet, they will likely be similarly priced to other RS-Dreamers at around $135.