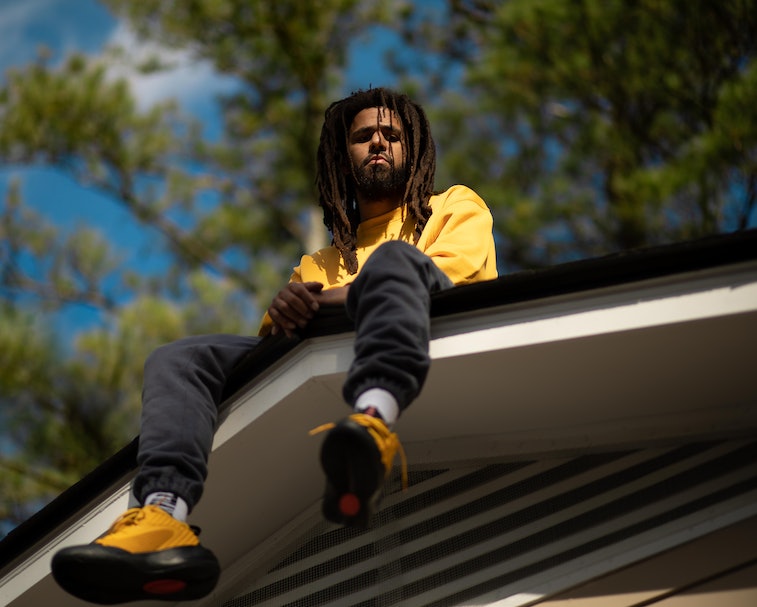 Puma will continue to humor the hoop dreams of J. Cole by releasing his second signature basketball shoe.

The "Dreamer 2" is set to release at the end of the month with a "January 28" color scheme named after the song from his album 2014 Forest Hills Drive. That's indeed the day the shoe will drop and is also the rapper's birthdays.

What yellow and black have to do with that date is beyond me — but then again I have no idea why a man who hasn't played high-level hoops since he was a walk-on bench player for St. John's University needs his own basketball kicks. The Detroit Piston's offer for J. Cole to try out for the team never materialized — but then again the chances of him getting a contract are about the same as me making it through one of his albums without falling asleep.

A new look — The Dreamer 2 features a similar midsole beefy at the heel to its predecessor, with a more dynamic and revised upper that makes use of suede, mesh, rubber paneling, and lace eyelets that consist of more laces. Silver detailing is doled out conservatively and looks to possibly be made of 3M reflective fabric.

Puma is vague about the tech and says only that the Dreamer 2 is equipped with the latest RS technology, short for "running system." Perhaps that's because the performance abilities don't really matter — because J. Cole is not, and I can't stress this enough, a professional basketball player.

For the new sneaker campaign, Puma and J. Cole have recreated the album cover for his 2015 album. This time, he sits on his childhood home's roof wearing his own shoes and a yellow sweatshirt to match. A press release insists you should find this inspiring, as if J. Cole's stare now says, "I did it, now it’s your turn."

J. Cole stans mobilize — If you're one of the people who inexplicably suggest J. Cole is every bit the rapper Kendrick Lamar is, you'll be delighted to know the Dreamer 2 will release January 28 for a reasonable price of $135. It'll be available through Puma and Footlocker's websites, as well as the Puma NYC flagships and Footlocker's physical locations.

Though I'm clearly no fan of J. Cole, I too am delighted that he has his own shoe. This tells me that anyone wearing it is a person I should avoid discussing hip-hop with at all costs — sparing me the pain of hearing about how "No Role Modelz" is "so deep."