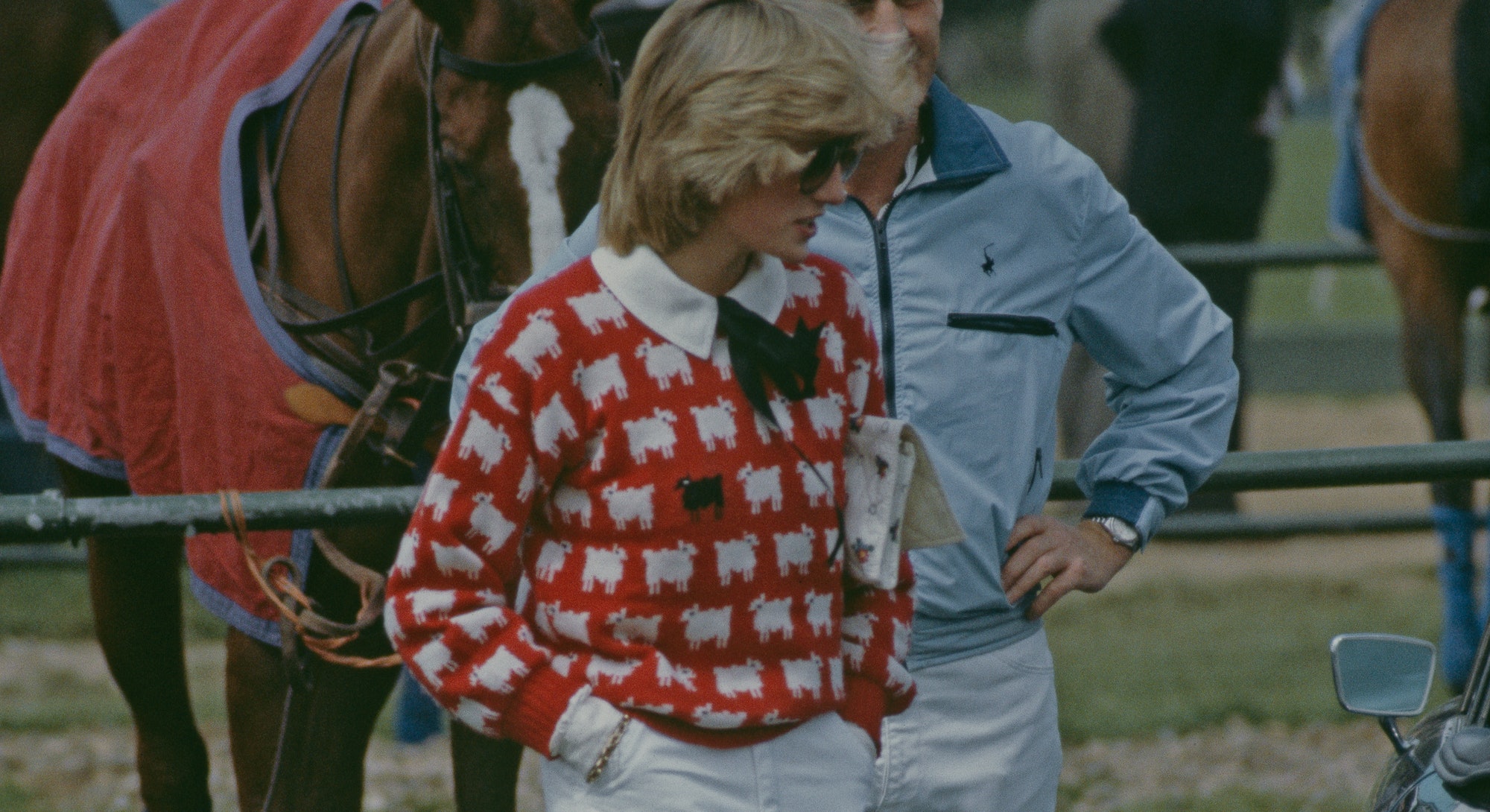 Even before her death more than two decades ago, Princess Diana of Wales had already cemented her place as one of the best-dressed women in history.

British or not, people have continued to be captivated by her life and the ensembles she wore, from her campy sweaters to the revenge dress. Although some might turn to more recent icons like Bella Hadid for inspiration, the truth is, nobody does it like Diana, even 24 years later. Her instinct for unlikely combinations — take her sweatsuit, blazer, and cowboy boots outfit, for example — has influenced everyone from Virgil Abloh to TikTok teens born after Diana’s death. In a world where trends come and go in mere weeks, the Princess’s fashion remains timeless.

That being said, there are many current factors assisting Diana’s style resurgence. ‘80s trends are blossoming alongside “Regencycore,” which echoes the era’s fashion while also fixating on regal-esque, debutante style. The Royal Family has also been in the spotlight — much to their chagrin — since Netflix’s The Crown launched, especially considering the show’s latest season focusing on Diana and Charles’ allegedly toxic marriage. To top it all off, Meghan Markle and Prince Harry’s recent explosive interview with Oprah has many revisiting the suffering Diana expressed while living as a royal.

Thanks to the interview, and Oprah’s now-famous question to Markle on whether she was “silenT or silencED” by the British Monarchy, we’re able to examine Diana’s style with an even more careful eye. Given the strict protocols of the palace — some of which Diana was known to defy — we know the Princess was keen on expressing her feelings through fashion. The world has a sense of what Diana was like, but most of that comes from still photographs instead of actual interviews. She had a talent for communicating with her clothing.

“I really thought they wouldn’t be interested in bringing the sheep sweater back.”

One piece of hers, in particular, became famous worldwide; a feat for a time without Tiktok or Pinterest. A black-sheep sweater, which Diana first publicly wore to cheer on one of Charles’ summer polo matches, features dozens of white-wooled sheep prancing across a bright red background, with one lone black sheep standing out from the flock. At the time, it didn’t carry the heavy, almost fateful symbolism it would take on later, as Diana found herself muzzled by the royals.

Countless recreations and replicas have been produced, but nothing could hold a candle to the original, much like the Princess that thrust the design into the spotlight. The tributes — or frankly, rip-offs — ranged from fast fashion to high-end labels like Lanvin. None captured the same feeling of playfulness or campiness, though, until preppy streetwear brand Rowing Blazers stepped into the game — bringing the fashion source, knitwear brand Warm & Wonderful, with it.

“It actually wasn’t that easy to track down Joanna Osborne or Sally Muir, who were the original designers [of the sweater],” Jack Carlson, CEO, founder, and creative director of Rowing Blazers told Input. “And I really thought they wouldn’t be interested in bringing the sheep sweater back, or they would’ve already done it.” Much to Carlson’s (and my own) surprise, however, neither Osborne nor Muir had ever been contacted about reproducing the original sweater, prior to Rowing Blazers’ request. Working together, they embarked on a journey to create “as faithful a reproduction as possible,” said Carlson.

Reproduction is no easy feat, though. It includes an old-school knitting technique called ladder jacquard knitting, and the sheep on the sweater are positioned so no animal loses its head to insufficient space. “We went through probably dozens of rounds of samples,” said Carlson. He also mentioned it can take up to six hours to produce one sweater. While the newest reproductions are hand-finished, the original sheep sweater was made on manual domestic knitting machines by Joanna Osborne and Sally Muir themselves.

The Warm & Wonderful founders and designers told Input that the sheep sweater was one of their very first designs. “It just seemed fun to have sheep on something made out of well, wool,” said Muir of the pattern. And when Diana wore the sweater, she said they thought it was great, but not much else. It wasn’t until people started getting their hands on magazines — People in particular — that demand for the sheep pullover grew. Warm & Wonderful began receiving “sacks of mail” from fans, which “seems quite Victorian now,” Muir chuckled.

Jewel in the crown

That sudden interest in the sweater is what eventually led Carlson to reach out to the two designers by email, to figure out if they were interested in reproducing the sweater. “Jack contacted us in 2019,” Osborne said. “[Since then] he’s always consulted us, which is pretty impressive.” Besides Carlson’s outreach, the two had seen replicas made with “no recognition” to Warm & Wonderful at all, but are happy the sweater is being embraced by even more generations — and genders — than before. “I’m not sure men in the ‘80s would’ve worn it,” chuckled Osborne.

“I mean, can you imagine Kate Middleton wearing such a thing?”

When the reproduced pullover first launched at Rowing Blazers as part of its Fall 2020 collection, it sold out unbelievably quickly, prompting pre-orders and restocks — one of which just hit the site this week. “Diana realized the power of clothes,” Osborne said. “She introduced the idea of smart casual wear.” A message, perhaps, that Rowing Blazers continues to convey today.

Besides Diana’s story, Carlson holds personal ties to the sweater as well. Living in London, his mother had owned one of the coveted original Warm & Wonderful pullovers. Even for those without such a memory, though, the sheep sweater holds a lot of history. “It’s so eighties,” mused Carlson. “But at the same time, very now.” He cited Diana’s tongue-in-cheek style, specifically her graphic sweater reading “I’M A LUXURY… FEW CAN AFFORD,” that Rowing Blazers also reproduced alongside its original creators. “I mean, can you imagine Kate Middleton wearing such a thing?” he asked. “It’s so funny. And so British.”

Diana’s hidden-messages flair could also be applied to Warm & Wonderful’s sheep sweater, which bore a black sheep in a canvas full of white ones. As the royal outcast, it was only natural that the Princess would be seen wearing it during her marriage to Prince Charles — especially considering their well-documented marital problems. And like Carlson mentioned, the sweater is very “now,” perhaps because people can relate to Diana’s trapped feeling in quarantine, and wish to escape by means of fun fashion.

“Diana was masterful at blurring the lines between even men’s and womenswear,” Carlson said. “She dressed with a sense of humor.” In a way, Diana wore things akin to her nickname as “the people’s Princess.” Instead of worrying about whether something was meant to be flattering or not, Carlson explained, Diana chose to wear pieces with meaning, ranging from tourist shirts from trips and gifts from close friends. “There’s a very famous look where she’s wearing a navy double-breasted blazer, jeans, and Superga sneakers,” he said. He cites the fit as the inspiration for Rowing Blazer’s line of Diana-inspired blazers.

Diana’s styling isn’t an idea or concept limited to one gender, said Carlson. Really, “she defies categorization.” To honor the Princess’s “inescapable influence,” though, Rowing Blazers will be expanding its collaborations with Warm & Wonderful as well as Gyles & George, the brand responsible for Diana’s “I’M A LUXURY” sweater. “Diana is definitely having a renaissance in people’s mind right now,” Carlson said. “This helps keep her alive in people’s minds.”