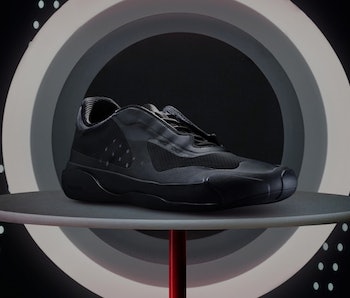 Prada and Adidas’ landmark partnership initially landed with a thud. Their debut sneaker, a $525 Superstar, offered little incentive to upgrade from the sub-$100 staple. But any disappointment from the two brands linking was washed away with the unveiling of an original silhouette, the A+P Luna Rossa.

The Prada America’s Cup, a sneaker made for sailing and adopted as a streetwear icon, forms the basis of the shoe brought into the future by Adidas. Semi-translucent detailing and more technical innovation than Prada could create on its own make the A+P Luna Rossa a much more wearable sneaker from today, from both a comfort and styling standpoint. And as a follow-up to the initial all-white color scheme, the new black and silver versions render the kicks even more attractive.

Matte black and a metallic silver consume all but Prada’s signature red stripe on the new sneakers, which will become the third release of the partnership at the top of the month. The shoe perfectly bridges the two brands’ strengths — but more importantly, justifies its Prada-level price tag.

Why go back to the America’s Cup? — I once picked up a pair of vintage America’s Cup sneakers and was quickly dismayed by how uncomfortable they were. The soles provide little support or cushioning, and it wasn’t long before I sold them back to the store I got them from.

Adidas’ spin on the nearly 25-year-old sneaker won’t have that problem, as it packs Boost cushioning into the familiar silhouette. Recycled Primegreen fabric on the upper brings in an element of sustainability, while the hydrophobic E-TPU shell envelops it with minimal added material. It’s a stealthy sneaker, even more so in the new black or silver color schemes, which isn’t something you can usually say about a status symbol purchase.

Both new versions of the A+P Luna Rossa are slated to go on sale through the Adidas Confirmed app at 10 a.m. ET July 19. Entries for a chance at purchasing the $695 sneaker are open now. For the layman sneakerhead, the hefty price renders the kicks all but a fantasy. But for those already interested in (and able to purchase) the America’s Cup, Adidas’ tech makes it the clear superior choice.