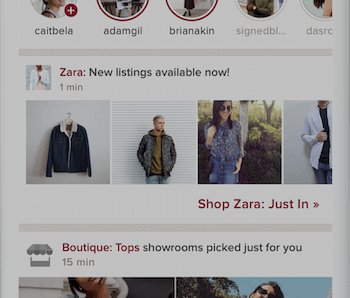 With seemingly every social media platform eager to launch its own "Story" format, Poshmark is now hopping on the wave. The digital commerce company is launching Posh Stories today in an effort to give sellers a more visually engaging way to display their goods. The new feature begins rolling out today and will become available to all users in the United States and Canada in the coming weeks.

Unlike the 24-hour shelf life that's become standard for the format, Posh Stories won't disappear for 48 hours — an extension that's useful when the user's goal is to make a sale. Besides that, the rest is fairly typical: vertically-oriented content consisting of photos or videos of up to 15 seconds, either of which can be captured in-app or uploaded from a phone. Custom texts and tags can then be added to link out to other users, brands, or listings. Viewers will also be able to like or share a story, much like they can with Poshmark listings.

Stories, they're so hot — After Snapchat pioneered the Story and Instagram successfully bit it, the rest of the social media industry complex has slowly but surely followed. Twitter, Facebook, YouTube: you name it. Hell, even Linkedin is reportedly developing its own version of social media's favorite copycat — the prospect of which is ghastly.

That said, Poshmark's new launch could be embraced by both buyers and sellers. Buying clothing is an exercise in imagination, and Posh Stories opens up new opportunities to feed it. In its announcement of the launch, Poshmark isn't envisioning its Stories as a purely transactional feature either. Users could also use it to showcase styling tips or create a mood board. With Instagram emerging as an informal platform for individuals to hawk their goods, it makes sense for Poshmark to adopt one of the social media giant's key features. Personally, I've bought clothing I've seen on Instagram Stories numerous times.

Rolling out to 60 million users — Poshmark says video has been one of the most requested features from its user base, which includes 60 million users and 8 million sellers. In 2019, the platform saw more than $2 billion in sales generated by its users, doubling the $1 billion from the year prior.

We'll see just how much Posh Stories can fuel that growth.