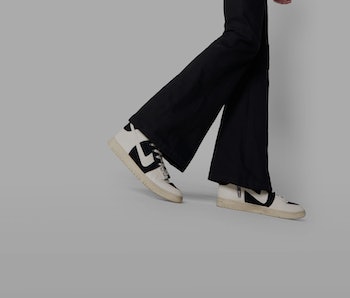 Plessume’s newest sneaker, dubbed “The Slam High” is advertised as “blurring the lines between luxury and street.” It looks like the silhouette achieves this by blending a classic street sneaker — Nike’s Dunk — with Rick Owens’ luxurious “Dunk” bootleg — making Plessume’s product a bootleg of a bootleg. So is it a total ripoff or the best of both worlds?

While the brand doesn’t admit to mixing the two designs, it does say the sneaker takes “inspiration” from its “favorite retro basketball and designer sneakers,” seemingly a nod to both Dunks. Rather than just meld the two shoes together, though, Plessume claims its inspirational design “pays homage” and honors past silhouettes — perhaps explaining why the Slam High doesn’t include “Dunk” in its name, despite the popular “slam dunk” term for which the original basketball shoe was named after.

A Dunk minus the title — Getting into details, Plessume’s Slam High boasts an overall shape similar to Nike’s Dunk High, while pulling shade and accent inspiration from Rick Owens’ Dunks. Stark black suede and cream leather dress the sneaker’s upper, also including a lateral silver zipper and cream “check detail” — an element nodding to Owens’ own cheeky homage to Nike’s Dunk.

Wearers are encouraged to tie the shoe’s long cream laces around the upper (in true Owens fashion) with a lace loop found at the heel. Describing the sneaker, Plessume reassures consumers that these laces, along with the upper, will wear with age. For good measure, though, the footwear’s soles come hand-distressed and dirtied, complete with a pre-yellowed midsole.

Rising demand for dirty sneakers — Design aside, Plessume joins the trend of blasé sneaker wearing. Seemingly in rebuttal to increasing sneaker demand and insane resale prices, brands have begun releasing shoes made of lavish materials — including suede, lambskin leather, or dyed canvas — and paired the luxuries with features like yellowed midsoles, tearaway uppers, and pre-dirtied accents. The contrast adds a cool, laidback look to the sneakers that wearers might have ironically spent hundreds on. Plessume’s Slam High, for example, costs $220 on its website — delivery not included. It really gives new meaning to “filthy rich.”

Of course, it’s not about how much you spend on the sneakers, but how you look in them. Despite the extreme paradox of hunting down shoes and paying incredible amounts all to give off an effortless appearance, not many consumers actually want to wear distressed or used sneakers, much less dirty a pair of their own. It’s best sneakers come fresh out of the box — or rather, worn out of the box.