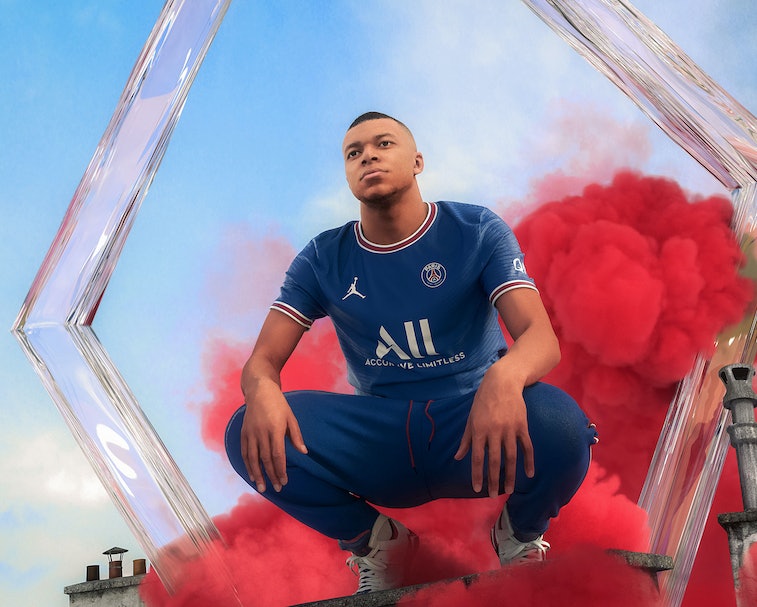 The Jumpman’s grip on Paris Saint-Germain is continuing to get stronger. PSG has unveiled its new home jersey for the 2021-22 season, which will feature Jordan Brand’s logo in place of the Nike Swoosh for the very first time. Previously, PSG had only used the Jumpman on its third jerseys and not its main home or away kits.

Jordan’s PSG kit takes subtle inspiration from the iconic Chicago Bulls uniforms of the ’90s. Red, blue, and white stripes on the neck and cuffs are almost identical to that of the Bulls, while the shorts feature a diamond pattern similar to that of the basketball team.

Prior to the club’s purchase by the Emir of Qatar, Tamin bin Hamad Al Thani, the Parisian soccer club wasn’t the same powerhouse it is today — so why not take inspiration from the most iconic basketball team of all time?

More sneakers are on the way, too — Prior to the Jumpman appearing on PSG’s kits, sneakers were the primary output for the four-year-old partnership, including five versions from the Air Jordan line. The sixth will be a red, white, and blue Air Jordan 7 that looks a hell of a lot like the iconic “Olympic” makeup. Images of the sneaker had previously leaked, but now a release date has been confirmed.

A Jordan-branded range of apparel will include jackets, pants, shorts, T-shirts, tanks, and hats — creating more Jumpman x PSG gear than we’ve ever seen before. The official home kit, meanwhile, is made from 100-percent recycled polyester in a bid for more sustainability.

The shirts are out now — If you want one of the new Jumpman PSG jerseys, you won’t have to wait. They’re available now through both parties’ websites, beginning at $90 for the replica and topping out at $170 for game quality. The PSG Air Jordan 7, meanwhile, will sell for $215 through Nike’s SNKRS app at 10 a.m. ET on May 22.

Now, we just wait to see if PSG’s away kits will also feature the Jumpman. If it’s not this year, it’s likely only a matter of time before the takeover is complete.