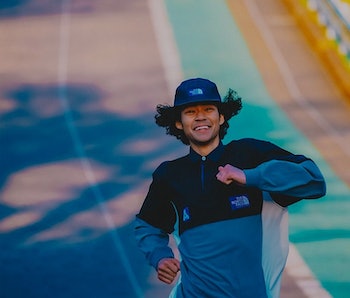 Recent years have seen Palace tick off a checklist of landmark collaborations in streetwear. The British skate brand was the first of its kind to work with Ralph Lauren and Moschino, and its partnership with Adidas has put the Tri-Ferg logo on the field of play in professional soccer, tennis, and golf.

While The North Face Purple Label isn’t as much of a stranger to outside collaborators, it still counts as a huge get for a brand based outside of Japan. Palace will release a capsule later this month with the Japanese offshoot, which operates independently of the larger American brand and is overseen by designers at Nepenthes.

TNF devotees hold Purple Label in high regard, and with the exception of a deal that lasted just two years and has since expired, it isn’t available in the United States. Unfortunately, that will still be the case with the Palace collab — but perfunctory savviness will still enable you to get your hands on the Japan-only release.

We hope you love indigo dye — The North Face Purple Label is the only party to announce the collaboration so far, and it has done much talking about the apparel involved. In the absence of descriptions, we’re left to fawn over images of the goods and speculate over their construction.

Indigo dye signature denim is a throughline for the capsule, including a fishing vest that looks like it makes use of actual denim. Otherwise, what appears to be indigo-dyed nylon ripstop appears across a work jacket, pants, and a five-panel cap — all branded with purple logos for both TNF and Palace.

These are the very type of inspired pieces that make Purple Label so sought-over outside of Japan. You just can’t get TNF goods as inventive as they are in Japan anywhere else.

And some logo-mania, too — The other half of the collection is a more overt exercise in co-branding, putting the two label’s insignia across T-shirts, both short and long sleeve, rugby sweaters, and the baggage that Purple Label is also known for.

Rugbies may seem like a strange sight amongst the lot, but they’re actually a seminal piece of rock climbing attire. Patagonia founder Yvon Chouinard began wearing them after taking a trip to Scotland in 1970, and they were the first piece of apparel he made for the brand after pivoting from hardware.

On the long-sleeve tee, you’ll see an image of the famed El Capitan formation in Yosemite National Park with Palace’s Tri-Ferg logo superimposed onto it. Camo contrasts with the purple tags on a side bag and backpack, and a purple tote with massive logos on each size is thrown in for good measure.

How to make the goods yours — Palace and Purple Label’s capsule will release March 27 exclusively through the brands’ Japanese websites and physical locations. You can skirt the limitations by making use of a proxy service — or wait it out to pay an inevitably higher price on secondary platforms like Yahoo! Auctions.

It’ll take a little bit of work and some scratch off the top, but it’s worth it. We’re talking about Purple Label here.