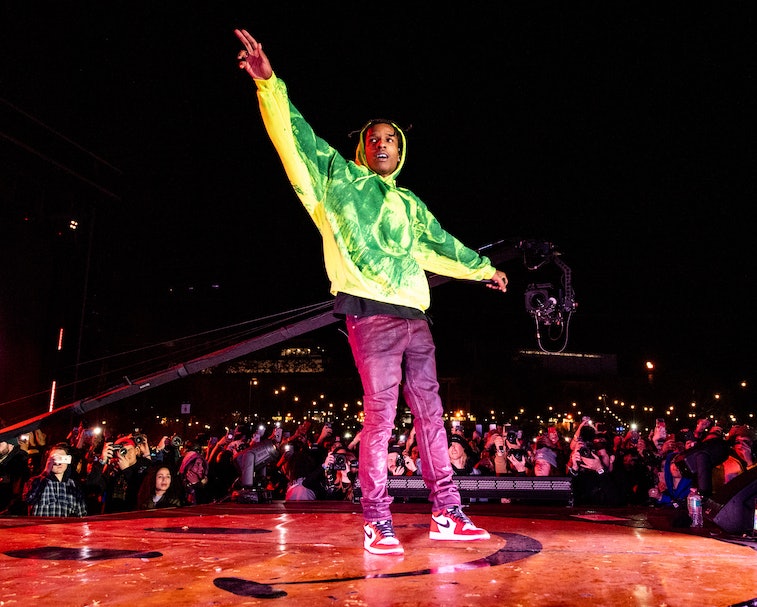 PacSun, the mall store filled with teenage angst, has announced that rapper A$AP Rocky will serve as its first-ever guest artistic director. The project, according to PacSun, also brings Rocky’s A$AP Worldwide onboard for a series of limited collaborative drops, activations, and campaigns exclusive to the store’s downtown Los Angeles and New York flagships for the next 18 months.

We assume an enticing offer must have convinced Rocky to work alongside PacSun, mainly because we can’t think of another reason the rapper would partner with the fast fashion brand. A$AP has modeled for Gucci, collaborated with Marine Serre, and is dating style goddess Rihanna; frankly, a mall store contract is beneath him. But with fellow rap stars — namely Travis Scott — profiting off any partnership available, the money may be too good to pass up.

More Vans OTW — “This partnership is special to me because it’s a collaboration that combines my roots, A$AP Worldwide, and some of the most respected heritage brands that have roots in both the sportswear and lifestyle worlds,” Rocky explained in a statement. “Together with PacSun, we will be releasing several limited-edition collections that are both nostalgic and forward at the same time.”

First up, expect some exclusive Vans (separate from the backless style Rocky has already made with the sneaker brand). Reimagined in three iterations of black canvas, white leather, and reflective silver — featuring Rocky’s signature flames graphic — the collaborative Old Skool shoes are set to drop July 16 in-stores and online.

With this partnership, PacSun aims to expand its core consumer age of 16 to 24 years old to 28 to 30 years old. “We’re super excited about the activations and are working down to the wire with Rocky’s team to get the details right,” PacSun’s president Brieane Olson said in a statement. “We’re launching billboards in DTLA, wheatpasting in both cities, and we have our special visual video assets on TikTok that’ll be supporting as well.”

PacSun is your go-to place for sneakers now — But what might aid PacSun’s demographic change more is its recent decision to enter the reselling business. An extension of the store, dubbed PS Reserve, plans to resell primarily footwear alongside apparel, accessories, and more.

Through the service, consumers won’t find typical PacSun brands like Guess and Brandy Melville: Instead, the resale initiative offers pieces from hyped labels like Jordan Brand, Yeezy, Supreme, Bape, and KAWS. PacSun claims the styles are part of its own inventory, which allows for orders to be fulfilled more quickly than services with “a middleman authentication process.” Michael Guerra, founder and owner of Magnolia Park, has been tapped by the brand to guide it through the reselling process and help authenticate products.

PacSun’s step into the sneaker resale market may be backed by the same notion that led it to hiring A$AP Rocky. Both endeavors push PacSun further into the streetwear category, appealing to hypebeasts (and their wallets). Now more than ever, there’s profit in reselling sneakers — and until original sneaker retailers come up with ways to limit bots and resellers, other companies are going to cash in on the demand.