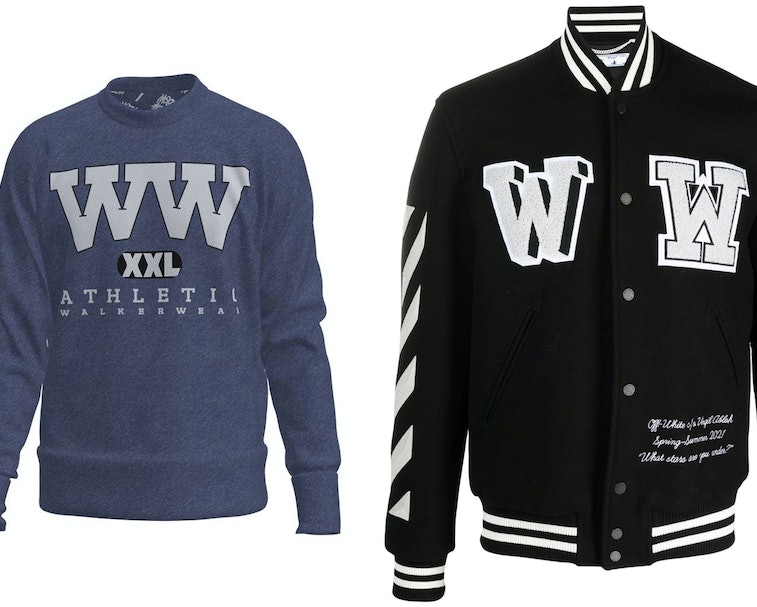 Walker Wear, a streetwear brand dating back to the early ‘90s and once worn by Tupac and Biggie, has filed a lawsuit accusing Off-White of trademark infringement. The suit alleges that a varsity jacket sold by Off-White copies Walker Wear’s “‘WW’ XXL Athletic mark design,” a mark that consists of two slightly overlapping Ws, as first reported by The Fashion Law.

Walker Wear says it had previously told Off-White that the jacket was creating consumer confusion, but it continued to be sold at outlets like Farfetch and Saks Fifth Avenue, which are also named in the suit. As of publishing, the jacket can still be purchased through Farfetch for $2,234.

The suit argues that the “WW” mark has been used by the brand for nearly 30 years and has “become widely associated with Walker Wear and acquired substantial recognition, goodwill, and fame.” Referencing Virgil Abloh’s self-professed “cheat code” of changing existing designs by just 3 percent, the suit says the designer “appears to be applying his ‘cheat code’ to [its] intellectual property.”

How strong is the case? — While Virgil Abloh is no stranger to accusations of creative theft, the first thing you’ll notice is that Off-White’s use of Ws is not that similar to Walker Wear’s “WW” mark. Crucially, the two letters aren’t overlapping but placed as two separate chenille patches on the left and white breast.

In the suit, Walker Wear describes its mark as consisting of “two stylized Ws, centered and slightly overlapping” that “typically appear in silver, set off against a dark blue or black background.” Off-White’s use of Ws doesn’t fit the former description, but it has applied them in silver atop a black background.

The Fashion Law argues the differences may be enough to avoid liability because Walker Wear’s trademark applies to the stylization of the letters and not the letters themselves. As an example, TFL points to the Washington Nationals, a professional baseball team with rights for its “specific stylized depiction of the letter” but not “sweeping rights over the letter ‘W.’”

Walker Wear is seeking damages and injunctive relief to prevent Off-White from selling anything similar in the future. Immediately after filing suit, Walker Wear also filed for a preliminary injunction that would prevent that jacket from being sold while the case is ongoing.