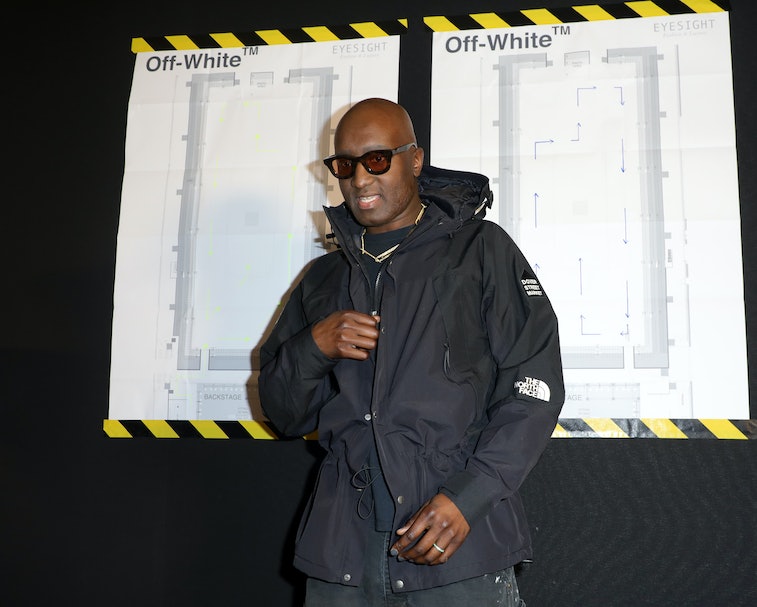 A Southern California-based ice cream chain with a streetwear bent has drawn the ire of Off-White. Virgil Abloh's label is suing Afters Ice Cream for copyright infringement, claiming that its merch and store decor create the illusion of affiliation with Off-White.

Off-White is just one of the brands After has riffed on, as it's also sold graphic T-shirts inspired by Anti Social Social Club and Fear of God. The T-shirt at hand in the suit uses Off-White's stripe motif as well as baring the words "Off-Diet."

Such a lawsuit is rich coming from Abloh's brand, as he's been accused of stealing from lesser-known designers on multiple occasions. Streetwear is also well known for spinning existing logos — usually from larger corporations — so it's a little strange to see Off-White so upset by the phenomenon reversed. Off-White has itself mimicked logos from the University of Nebraska, the Philadelphia Eagles, and Helly Hansen, the latter of which sued Abloh's brand.

Off-White's argument — Off-White argues both the merch and interior decor, which includes similar striping, infringe upon the brand's trademarks, according to a suit filed Tuesday in a California federal court. As reported by The Fashion Law, Off-White says the "retail fixtures, signage, [and] interior décor" is intended to "confuse consumers into believing that [its] products are Off-White products and/or that [it or its] business is affiliated with Off-White."

Off-White does have more than 10 active trademarks for its stripe design, described as "fifteen alternating parallel diagonal lines of varying sizes." There may be room, however, for Afters to use a defense of parody.

Afters could very well be safe — As TFL points out, parody is defined legally as "a simple form of entertainment conveyed by juxtaposing the irreverent representation of [a] trademark with the idealized image created by the mark’s owner." To be protected, a parody must use just enough of the original trademark to call to mind the design and use it in a unique way to convey humor, satire, mockery, or commentary."

To an onlooker, Afters' use of Off-White's trademark appears to do just that. "Off-Diet" isn't especially funny, but it is indeed an attempt at humor while selling a sugary frozen treat. It'll be up to a judge to decide if this is a valid defense.

Afters' other merch does the same thing — Afters also sells T-shirts, signage, and ice cream cups that alter Anti Social Social Club's logo to read "Anti Diet Diet Club." It isn't even an original spin, as there are countless riffs on ASSC out in the wild. The ice cream chain has also taken its attacks on diets to Fear of God, changing its logo to say, "Fear of Diet."

Neither FoG nor ASSC has filed suit against Afters, and perhaps they're smart enough to realize it isn't worth the trouble and that they aren't likely to win. Logo parodies are a core of streetwear, so there's a cognitive dissonance when a brand starts to get defensive over it.

As Barbara Kruger said when Supreme sued another brand over its logo, a riff on Kruger's work, we're seeing a "ridiculous clusterfuck of uncool jokers."